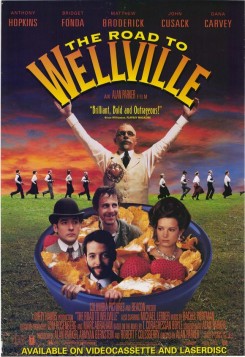 Road to Wellville, The

The Road to Wellville, set in 1907, is a comedy about the famed health fanatic and creator of the corn flake, Dr. John Harvey Kellogg. Dr. Kellogg is the health radical of his day and holds court at his Battle Creek Sanitarium where wealthy people travel from all over the world to find the key to biological living. He is obsessed with colon cleanliness, vegetarianism, and refraining from sex which he believes is "the sewer drain of a healthy body." However, not everyone believes that Dr., Kellogg deserves the reverence his followers impart.

In the opening scenes we are introduced to some of the hilarious exercises that Dr. Kellogg's devotees engage in at the sanitarium, such as vocal exercises and an early form of calisthenics. In the background, we see horse drawn carriages either pulling up to the sanitarium or in the street scenes in Battle Creek, lending to the period atmosphere of the film. These carriages were driven by professional drivers. Arriving at the Battle Creek "Temple of Health" are a young couple, Will and Eleanor Lightbody. She is an avid supporter of Dr. Kellogg's methods and she has brought her husband there to be cured of his drinking problem. She had her baby at the sanitarium, but unfortunately it died and she believes that she and Will can never be happy until they are well. Will, however, is a skeptic. He is whisked away by a nurse and separated from Eleanor and begins hallucinating that every woman he sees is naked.

Along with the Lightbodys is another arrival to Battle Creek, Charles Ossening. Charles we find is in business with Mr. Goodlow Bender and together they plan to manufacture a new brand of corn flakes, Perfo. The company was initially underwritten by Charles' aunt, however Bender has squandered the money. They, in turn, meet an adopted son of Dr. Kellogg named George, one of forty children adopted by Kellogg, who is now a derelict with a vendetta against his adoptive father. Their plan is to use the Kellogg name to further their own business and even get an ex-employee of Kellogg's to help them come up with a recipe for their Perfo breakfast food. In these introductory scenes between Charles and Bender, there are numerous horse drawn carriages seen either moving along the streets or tethered outside the restaurant where they meet with George Kellogg.

Charles, Bender and George use an old factory to start experimenting with corn flake recipes. As they first arrive at the old factory we see that there are pigs in muddy pens outside and one is even roaming around inside the building. There are also some birds that flutter in the rafters of the filthy and run down old site. As they toast their new venture, Charles falls over and a rat is roused from behind a barrel. Later, as they test recipe after awful recipe, George removes the batches and throws the corn flakes to the pigs. For this scene, the pigs were placed by their handler and were given food rewards. The pigeons which fluttered in the rafters were homing pigeons and returned to their cages after the scene was shot, as they had been trained to do. To make the rat appear as if the actor's fall has caused him to scurry from behind the barrel, the trainer released the rat which ran A to B and was recaptured by the trainer at the end of the shot. The starting position was well protected from the falling actor by a barrier of sacks filled with sawdust.

Intercut throughout the film are scenes showing the hilarious contraptions used at the sanitarium for exercise, enemas, baths, and other rejuvenating techniques. Another arrival at the spa is Dr. Lionel Badger, a famous vegetarian fanatic who has written a paper on sexual gratification and the clitoris. Dr. Kellogg loathes him since he believes that sex is dangerous to the health and unnecessary except for procreation. Carriage horses are again in the background as Dr. Badger arrives. They are also seen as atmosphere when Dr. Kellogg's assistant collapses of a heart attack in the snow just outside the entrance to the spa.

In a scene where Dr. Kellogg makes a flamboyant entrance into the dining room, a live goose is wheeled in a large cage. Dr. Kellogg joyfully announces that "the goose is uncut", a tribute to vegetarianism. For this scene trained handlers placed the goose in the large wooden cage that was mounted on a wheeled cart. The cart was gently pushed with the bird standing in the cage.

In another lecture scene, Dr. Kellogg presents a docile vegetarian wolf which is seated on a table where an aide holds him by a leash. Dr. Kellogg compares this wolf to one which is growling in a cage. He waves a raw steak at the vegetarian wolf who does not react at all. Then he waves the steak at the caged wolf and it growls and howls. For this scene, trained handlers were present at all times. The set was cleared of cast and crew while the animals were placed by their trainers. The docile wolf was continually stroked and talked to by the trainer to keep him calm. He was rewarded with treats. When the steak is dangled near this wolf's face it was held at a good distance from the wolf and the camera angle was adjusted to make the meat look closer than it actually was to the animal. The trainer of the caged wolf was always present on set. To make the wolf growl and then howl, the trainer made a grabbing motion with his hand toward the nose of the wolf and gave voice commands. The animal also received food rewards.

Bender, Charles and George, in their frustration at not finding a recipe, steal some of the Kellogg's corn flakes and re-package them as Perfo. Bender loads up these boxes into a carriage and goes off to get orders for their bogus product. Later, when Bender skips town leaving Charles with his hotel bill, Charles bolts out of the arms of the police and spooks some horses in the street. For this scene, the carriage horses were handled by trained wranglers. They reacted naturally to the commotion of someone running by flinging their arms. The horses merely shied a bit and were not in motion at the time nor did they run.

Another banquet scene is staged in a horse barn. The camera pans down the stalls of horses showing their rear ends which are the backdrop for the meal Dr. Kellogg has set. For this scene the horses merely stood naturally in stalls.

At a lawn party held by Kellogg, Charles arrives disheveled from running from the police earlier and finds his aunt there, another devotee of Dr. Kellogg. Kellogg takes this opportunity to expose Charles as a fraud. Charles bolts again, spooking more horses harnessed to a carriage. For this scene the horses were controlled by trained wranglers and did not bolt or run. In the background we see swans and ducks swimming on the lake to lend atmosphere.

George Kellogg is still angry with his father so during a fireworks display sets fire to the sanitarium. Horses galloping at full speed pulling a fire wagon nearly collide with the horse drawn police wagon carrying the now captured Charles. It looks to be a near-miss collision of the horses, however the paddy wagon is overturned and the horses run off. For this scene, professional wranglers were used to drive the two teams of horses. The scene was shot in cuts and one take was of the galloping team pulling the fire wagon. Another shot was of the galloping team pulling the police wagon. A third take was done in which the driver was to hit the brakes on the wagon and release a pin known as a "tongue." This would then release the team from the wagon and allow them to run, unencumbered, out of camera range where pick up riders were to regain control of the horses. Unfortunately, this scene was shot in the early hours of the morning at a time when the horses were not used to being driven. The horses were nervous and spooky although they were encouraged to calm down. When the driver braked, the pin did not release the wagon from the horses causing the wagon to be jerked off the brake, turned upside down and torn from its undercarriage. The horses spooked, went down the wrong road where there were no pick up men and dragged with them the undercarriage which was hitting them in the hock area. Finally the horses headed off the road and the undercarriage got caught on a boulder stopping them. Representatives of American Humane intervened and a veterinarian was called to examine the horses. The animals were treated for their wounds and vaccinated for tetanus. Fortunately they were not seriously hurt.

The sanitarium burns down. However George is reconciled with his father, Will and Eleanor Lightbody go on to have four daughters and Charles Ossening becomes very wealthy making a drink called Cola Kane. Dr. Kellogg rebuilds the sanitarium, but eventually has a heart attack, ironically in the midst of a dive into the lake immediately following a lecture on the virtues of biological living.

The American Humane Association was represented on the set by the New York State Humane Association, Ulster County S.P.C.A. and the Columbia-Greene Humane Society. Most of the animal action in the film was mild and handled well. However, although the incident during the filming of the collision sequence was an accident, we have studied the reports of our affiliates and that of the veterinarian and have some concerns about the scene.