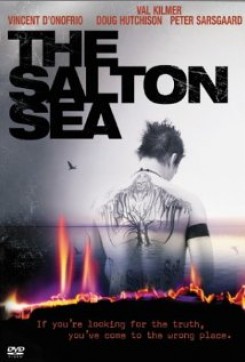 In this surrealistic and often violent drama, a man (Val Kilmer) witnesses the murder of his wife and then goes undercover as a drug dealer to avenge her death.

Several fish lie on the beach, flapping on the sand. Trainers gently took the fish out of their tank and placed them on the ground for less than thirty seconds, per AHA Guidelines, then returned them to the water. The fish were rotated so that no fish was used more than one time in a row and no fish was used more than three times in one day. Rubber fish were also used to accomplish this scene.

As a cruel and sadisticdrug dealer, the ironically monikered Pooh Bear (Vincent D’Onofrio) gets his kicks by staging a mock JFK assassination using pigeons. He places four pigeons in a remote-controlled toy vehicle and drives them around in a “procession” on a track. All of a sudden, several armed men shoot at the pigeons, supposedly killing three. To achieve this shocking scene safely, trainers placed four live pigeons in the toy vehicle and they were filmed being driven. The birds were then removed and replaced with plastic, stuffed taxidermy, and animatronic pigeons, which were used for the shooting sequence and also scattered alo ng the side of the track to indicate that the men had been practicing for some time. The pigeons used in the car and the birds kept in cages off to the side of the staged massacre were all well cared for and had plenty of water and food breaks between filming.

In another scene, a badger is in a cage straining against the bars and poking its arms through, desperately trying to escape. Trainers gently placed the animal in the cage and scattered bits of food on the ground to prompt the badger to move around and press against the bars. Trainers also used a buzzer to cue the animal to look in a certain direction.