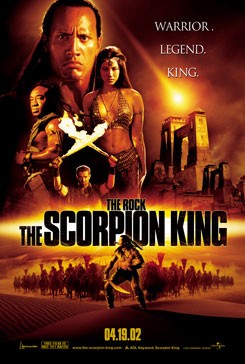 5000 years ago, in the ancient city of Gomorrah, The Scorpion King, Mathayus (The Rock), is hired to assassinate an evil ruler set on destroying all of the tribes in the land. Mathayus's dangerous task leads him on a wild adventure and into an unlikely romance with a sorceress, played by Kelly Hu.

Mathayus's main source of transportation is his loyal camel, Hanna, who was played by two camels named Aladdin and Moe. A trainer rode the camel to position and The Rock mounted it with a ladder. From off camera, a trainer would cue the camel to bow and sit on ground, as well as to nudge The Rock with its head. Also in the film, Mathayus mounts Hanna while his chatty buddy tries and merely slips off. Later, the same buddy pulls on the camel's lead but the camel resists and the camel bows to let an actress mount it. A trainer from off camera would cue the camel to either resist or bow and instructed the actors on how to handle the camel gently.

Ever the loyal companion, when Mathayus calls to Hanna, who is tied to a post, she breaks away and runs to Mathayus. For this scene, the camel's tie was loose to allow for an easy break-away. Mathayus scales the side of building, mounting Hanna from above. For this action, the camel followed a trainer carrying a grain bucket to her mark, and the actor gently climbed onto the camel. Trainers were always close-by to monitor and cue the camel from off camera.

Experienced wranglers rode trained lay-down, falling, jumping, and rearing horses during the extensive battle scenes. For the sandstorm, a wind machine blew walnut shell flour into the air while trainers released the horses one at a time to cross through the fake storm. Afterwards, trainers rinsed the horses' eyes clean. All of the weapons were fake - swords and bows and arrows were made of rubber and plastic. The wranglers dismounted the horses between takes to rest the horses' backs and the animals were not near live explosives. For the village fire, fake explosions were created with torches and an air compressor to blow the flames up into the air and sound effects were later added. The wagons and mules were positioned by wranglers who remained close by, as an actor drove the mules forward with reins. Later, a horse and rider ride thru narrow hallway and Balthazar (Michael Clark Duncan) knocks off the rider while the horse keeps going. For this scene, an experienced stunt rider rode the horse and achieved the practiced fall without a hitch.

Men guide snakes into urns, and the sorceress later pulls out cobra and points it at Memnon (Steven Brand). Wranglers doubled as actors in this scene and carefully handled the snakes, while computer magic made it only appear as though the actress was holding the snake. Later, Mathayus fights with snakes on the ground and lops off many of their heads. Approximately 100 non-venomous snakes were used in this scene. Wranglers placed them on the ground and the stunt actors were very careful not to step on any. The snakes that lost their heads were actually computer generated.

A man picks up a scorpion and lays it on his hand while several black scorpions crawl around. The man then cuts the tail off of a scorpion and puts the poison that comes out onto his arrow. Wranglers placed several live scorpions onto a contained surface and instructed the actor on how to gently pick one up. A scorpion that had died of natural causes was also used in this scene. The poison was actually honey.

Huge red ants crawl out of giant mounds in sand and attack Mathayus. He crushes them with his chin. These were all computer generated.

A lion and a tiger are chained to the ground and appear to growl at each other and fight. A lion cub and tiger cub were used in this scene. Trainers attached soft collars that were tied to the ground and gave the friends a bone to play with. This play behavior simulated the fight. Sound effects were added in post production to further enhance the appearance of aggression.

An elephant travels through the town with 2 passengers in a carrier on its back. Trainers helped the actors onto the elephant and led the animal from A to B.

At the village, a lady is selling exotic birds. Goats and chickens also make an appearance. Trainers cued the birds from off camera to stay and rewarded them with treats. The chickens were also monitored and rewarded and a border collie named Moss was on hand to keep the goats in line.

A falcon perches on a dead body. It perches on Mathayus's arm and flies away, landing on another person's arm. The falcon was placed on a perch and filmed flying in front of a green screen. Trainers placed it gently onto the actors and retrieved it afterwards.

Caged rats and birds add background ambience at a desert laboratory. Trainers placed the animals in cages and removed them once scene was complete.