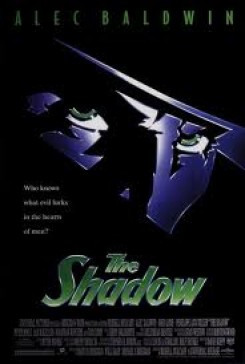 The Shadow is an action film based on the comic book and radio character of the 1930's. The Shadow is a mysterious crime avenger who keeps his identity secret and has powers of great strength and mind control. In this adventure, he battles evil to save the future of New York and ultimately that of the world.

In this chapter of the Shadow's adventures, we see how he was recruited to be a powerful champion for good. The film opens in Tibet where workers in the opium fields are being patrolled by riders on horseback. This action is very mild and the horses move from A to B. We are then introduced to the master opium dealer in his den and witness the cold-blooded killing of one of his supporters. This evil master is at his desk and we see him lean down to feed a dog who is sitting at his feet. For this scene, the dog was told to sit and stay by his trainer. Later the evil lord, who is revealed to be Lamar Cranston, an ex patriot American living in Tibet, is kidnapped by horsemen and taken to the temple of a great teacher. This teacher changes Lamar's mind from evil toward the fight for good. The powerful teacher explains that it is because Cranston knows what evil lurks in the hearts of men that he can effectively fight that evil. The action shifts back to New York in the 1930's and we find that Lamar Cranston is a very wealthy gentleman who hides his identity as the crime fighting "Shadow." When he senses a crime in progress, he acts anonymously, transforming into an invisible caped man, face transformed, and able to appear and disappear at will. When asked how he was aware of the crime, he answers in the classic retort, "the Shadow knows." One person he can not control is Margot Lane, the beautiful daughter of a scientist, who has psychic powers of her own. At this time, a sarcophagus is delivered to the Natural History Museum containing the descendant of Ghenghis Kahn, whose name is Shiwan Khan. He is also a master of mind control and illusion and a formidable opponent for the Shadow. Khan's plan is to take over New York and then become Emperor of Mankind. It is up to the Shadow to stop him. This he does with the help of Margot Lane and his other allies who save Margot's father from the hands of Khan and New York from evil incarnate. In a flashback scene, Lamar Cranston, the Shadow, relives the time when he was an evil man himself. There is a dreamlike slow-motion battle in Tibet, where he is amongst the brutal conquerors who are slaying the peasants from atop their horses. For this scene, the horses were placed on their mark and riders rode toward the camera at a slow pace. The explosions that are seen were at a good distance from the horses who were in no danger at any time.