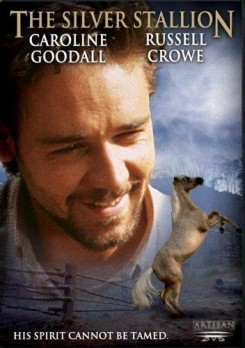 The Silver Stallion is a family oriented drama about a beautiful cream-colored stallion and his life of epic and even mythical proportions in the Australian wilds. A woman and her young daughter are riding horses, discussing Aborigine philosophy regarding ecology when they happen upon a baby kangaroo caught in some tree limbs and rocks on the ground. They get down and pet him, noticing that he is hurt and has blood on his leg. They take him home, nurse him and keep him in a bag slung over the back of a chair, substituting for his mother's pouch.