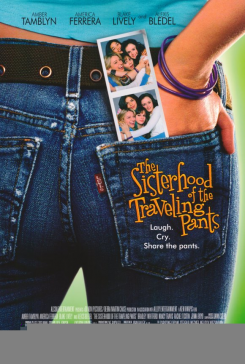 Sisterhood of the Traveling Pants, The

Based on the best-selling young adult novel by Ann Brashares, Sisterhood tells the story of four best friends who find a pair of thrift shop jeans that magically fit and flatter them all, despite the girls' various shapes and sizes. The girls decide to share these pants as a way of staying in touch during their first summer apart. Filled with adventure, first love, and loss, this is one summer these four friends will remember forever.

In a few scenes, Lena (Alexis Bledel) is transported to and from her grandparents' home by two mules and a donkey. Production used animals that walk these paths every day as ecological "taxis" on this Greek island, and their owner stood just off camera at all times to help direct the animals. The actors were helped onto the mules and had learned how to handle and ride them before filming began. American Humane's Certified Animal Safety Representative on location made sure the animals had adequate shade and water when they were on breaks.

Fish out of water

In a scene in which Kostos (Michael Rady) and Lena enjoy a boat ride, Kostos holds a small flapping fish and, with Lena's help, tosses it back into the water. To accomplish this action, three Gilthead fish were kept in three separate buckets that a fisherman manually aerated with buckets of fresh water. During filming, a diver hid at the side of the boat holding a bucket of sea water. Just as the camera was about to roll, an experienced fisherman placed one of the Gilthead fish on the boat deck. In accordance with the proper handling instructions listed in American Humane's Guidelines, the actor picked it up and showed it to the actress. Lena put her hands over the Kostos's hands and together they appeared to throw the fish into the water while actually dropping it into the diver's bucket.

An additional shot that may not appear in the theatrical release shows Kostos throwing a fish on the deck of the boat. This was a rubber fish.

"Maggie," Bridget's (Blake Lively) beautiful golden retriever, makes a few appearances in the film. In one scene, the dog walks upstairs and steals a piece of pizza from Carmen (America Ferrera). Another sequence has Maggie grabbing the "traveling pants" and running out of the house and down the sidewalk with the pants in her mouth. In both cases, a trainer put the dog on mark and stood off camera using a combination of hand signals and verbal cues to accomplish the mild action.

As Lena and Kostos drive off on a motorized bike in Greece, a dog barks at them and runs alongside the bike. When the pants arrive at the Mexican post office, two dogs pass by the building. It is very common for dogs to run loose in both Mexico and Greece, and these carousing canines just happened to be in the shot while the crew was filming.

Production provided documentation for the fish on display at the market and the octopus hanging on Grandma's clothesline—all purchased at a local fish market in Greece.