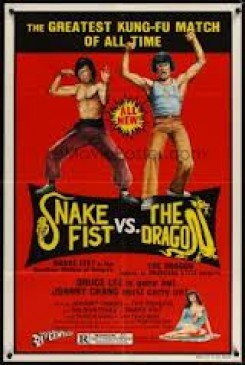 Snakefist vs The Dragon, The

The story begins with a voiceover saying when the snake style of kung fu was at its peak a vicious fighter by the name of Hsia Sa was one of the greatest exponents of the style. The snake style can be a vicious style and Hsia Sa was a vicious fighter and had an ambition to dominate the fighting world and had killed many experts until one day he challenged a monkey style expert called Koo Ting-sang and they held a contest.

The brutal fight scene between the monkey and snake was staged for the film and appeared to cause severe injuries to both animals. This earned The Snakefist vs. the Dragon an Unacceptable rating from AHA. The ongoing expansion of the AHA Guidelines for the Safe Use of Animals in Filmed Media has raised the standard of care for animal actors worldwide. In addition, technological advancements have created safe alternatives to risky action, enabling filmmakers to maintain their creative vision without compromising the welfare of animal actors. AHA continues to be a vigilant watchdog for animals in film and television and acknowledges the groundbreaking history of this program while expanding and refining procedures to reflect increased knowledge and new challenges.