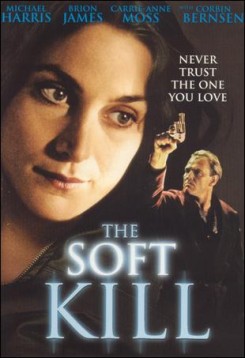 The Soft Kill is a murder mystery involving the implication of Detective Jack Ramsey in the killing of gossip columnist Kimberly Lewis with whom he was having an affair. Kim is not only a very wealthy woman, but also married to the District Attorney, Martin Lewis. During one of their trysts, Kim hears noises that sound as if Martin has returned home. Jack slips out, but when Kim's body is found strangled in her living room the following morning, the evidence points to Jack. Jack had been planning to leave the force and move to Oregon, but the murder changes that. His former partner, Ben Harvey, is suffering greatly from the recent death of his young wife and Jack finds his pain difficult to be around. In fact, this is the reason Jack had planned to move. Ben often alludes to the fact that Jack is a womanizer and doesn't know the meaning of love or loss.

Jack spends time with Ben and in scenes at Ben's home, Jack holds Ben's cat, walks around with it on his shoulder and puts it down on the floor to feed it. For this scene, a trainer placed the cat with the actor and was present at all times during filming. Kim's sister, Jane, arrives wanting to hire Jack to find Kim's killer. She believes that it is Martin who is behind her sister's murder. Jane is a single parent and Jack becomes interested in her and in helping her find answers that will hopefully vindicate him at the same time. He meets her at a park where her daughter, Allison, is studying the mating habits of the ducks on the pond. We see she and Jack watching the birds through binoculars. This scene was shot on location and the ducks were filmed in their natural habitat. In the course of the film, we find that Ben was aware that his wife was having an affair with Jack, although he never lets Jack know this. Ben actually killed his own wife because of her betrayal. He had incriminating photographs of Jack with his wife as well as photos of Jack with Kim and with Jane. As the story unravels we find that Ben's revenge is to get Jack to feel the same pain that he feels by taking away those people that Jack loves. It is revealed that Ben is the one who killed Kim as well as others, in order to implicate Jack. In the climax of the film, Ben is ready to kill Jane and Allison, believing that maybe their deaths will finally hurt Jack and exact the revenge Ben is seeking.. Jack is able to save them, but Ben commits suicide rather than live any longer in pain.