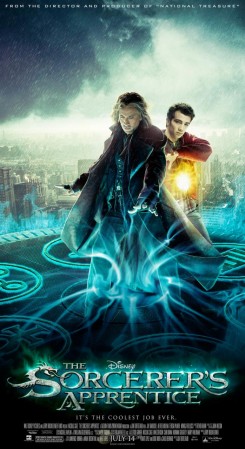 After spending hundreds of years searching for a child predestined to become Merlin's replacement, master sorcerer Balthazar (Nicolas Cage) meets a young apprentice, whom he must train to fight his evil nemesis, who is planning to unleash a spell to raise the dead and rule the world.

Throughout the film, Dave (Jay Baruchel) has a pet bulldog named Tank, who is seen performing such mild action as sitting, standing, lying, being held or petted, and licking prop electrical cords. For all of these scenes, whether with a puppy or an adult dog, trainers used hand signals and verbal commands to cue the mild action, which the trained dog was accustomed to performing. The dog was also cued to lift its leg as if urinating — the "urine" was added in post-production.

For scenes in which Tank is on Dave's lap in a moving car, the vehicle never actually moved — the movement was simulated using projected images on screens around the windows. The trainer stood just off-camera and cued the dog to react in certain ways. For intense stunt action, such as the car moving fast or being crushed, the dog was not in the vehicle.

The leashed dog seen with the woman on the sidewalks of New York was handed to the actress moments before filming this brief and mild action.

The wolves in the film were actually highly trained wolf-dog hybrids that ran upstairs in front of a green screen and a jumped from a prop (green screen) platform made to look like a subway platform. The wolf "running into" a turnstile was also achieved via green screen and trained run and stop commands. Trainers cued the action in this well-choreographed scene. The wolves were extensively rehearsed to perform the running and jumping action. For the scene in which the wolf puppies are on Dave's chest, trainers gently tossed two Husky puppies a few inches onto the actor's chest, and instructed him to pet them. This scene was brief and well-rehearsed.

The cattle, oxen and other background animals at the Indian outdoor market were placed on their marks and either allowed to graze at liberty or on lead ropes held by actors. Costumed trainers were in the scene during filming, which took place on an enclosed sound stage. All horseback riders were stunt riders or experienced actors skilled at riding. Horse-drawn carriages had experienced drivers and teams of horses familiar with each other. The torches were props with controlled fire effects.

Pigeons fly away as Balthazar lands his metal bird. He then picks up an injured pigeon, ties a string around its leg, and releases it to fly off. The pigeons flew out from a release box held by off-screen trainers. They were all homing pigeons and they all arrived back home safely. The actor was instructed on the handling of the "injured" bird before filming began. A trainer placed the bird on the ground right before cameras rolled. The actor picked up the pigeon and pretended to tie a monofilament line around the leg of the bird. The bird took flight from the actor's hand.

Butterflies, roaches and all the insects in the film were computer-generated imagery.

American Humane also monitored a frog scene, which was cut from the theatrical release.