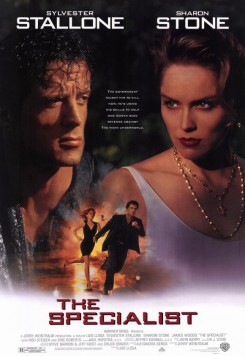 The Specialist is an action film about an ex-CIA operative, Ray Quick, an expert in demolition and bombing assassination, who is hired by a woman interested in avenging the death of her parents who were killed by the Cuban Mafia when she was a girl. However, the Mafia has hired their own protection specialist who turns out to be Ray's ex-partner, Ned Trent. These specialists ended their partnership when the moral issue of whether or not to kill innocent people divided them. One now sells his services for ethical issues and the other works for organized crime. In the resolution of these vendettas, we witness violence, sex and a great many explosions.

Animal action is minimal in the film. There is a cat who becomes Ray's pet. In an early scene we see a scruffy cat following Ray as he walks along the rainy street and over a bridge to catch a bus. The cat rubs up against Ray's legs as he waits and finally Ray scoops him up and takes the cat with him on the bus. For this scene there was no traffic allowed on the street. The cat was obeying the commands of the trainer, moving from point A to point B, and given food as a reward. His coat was also sprayed with a little bit of water to give him a matted look. Ray lives in an old warehouse and has a chain link enclosure around the area where he creates his ingenious bombs. There is a scene where the cat is climbing up the chain link fence as Ray works on an explosive device. The cat is then seen chasing a mouse. This scene was done in cuts, and for the climb a trainer was stationed at the top of the fence and received the cat when he reached the top. The cat was rewarded with food. For the rest of this scene where we believe the cat is chasing the mouse, first we see the mouse running and then cut back to Ray in his cage. Then we see the cat running. This gives the illusion that the cat is chasing the mouse. However, both animals were filmed separately going from point A to point B with food as a reward. The cat and mouse are never seen in the same shot. In another scene, Ray arrives home with groceries, takes out a fresh fish and gives it to the cat. The fish had been purchased at a market. There is a scene early in the film that shows how easily Ray can infiltrate the Mafia operation. He blows up the office of a nightclub owner who is working for the mob. In the office is a large fish tank in which barracuda swim. When the office explodes, so does the fish tank. This scene was also shot in cuts. At first we see the barracuda swimming in the large tank. These were real barracuda which had plenty of room to comfortably swim about. For the explosion, stunt men fell into a break-away tank containing no live fish. The barracuda that are visible in the tank during the stunt and seen strewn on the floor and table just after the explosion were fake barracuda made by the prop department and rigged with wire to appear live. Another explosion takes place at a dockside seafood restaurant where Ned plans an ambush for Ray. Ray however, outsmarts him and blows up a building near the restaurant creating the diversion he needs to escape. While the explosion is going off, we see Ned next to his car as a shower of crabs rain down from above. For this scene both live crabs and fake rubber crabs were used. The live crabs were dropped from only three feet while special effects people off camera threw the rubber crabs and other debris to give the appearance of debris from the explosion. After the shot, the live crabs were returned unharmed to their trainer. In the final explosions of the film, Ray's warehouse hideout is discovered and he sets off the land mines that will blow it up and give him the cover to escape. In the last seconds before the entire warehouse will self-distruct, Ray, May, and the cat escape through a trap door in the floor into an underground tunnel system. Ray is seen putting the cat down the hole as the explosions are going off at a distance. We then see the cat take off ahead of Ray and May. The cat was never near any of the explosions. He merely ran A to B from the actor to his trainer, who was just off camera where he rewarded him with food.