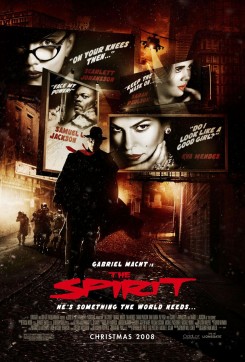 After being murdered, police officer Denny Colt (Gabriel Macht) returns from the dead as The Spirit, a hero who battles the evil forces that lurk in the shadows of Central City, including the Octopus — a psychotic villain who kills anyone who sees his face.

The opening credits include an overhead view of several cats walking around, while The Spirit (Gabriel Macht) stands nearby. A cat follows him into another room and then jumps up on a nearby scratching post. This sequence was filmed in separate shots. For the first part of the sequence, trainers placed several cats on the ground, where food had been scattered, and then stood just off-camera. The cameraman stood on a platform to shoot the scene. Trainers retrieved the cats, then a trainer placed the cat that follows The Spirit on its mark, stood by the scratching post and called it to come.

In a few scenes, a cat walks on a brick wall as The Spirit walks alongside it. The wall was a custom-built platform secured to the ground. The scene was filmed against a green screen. The cat is also shown on top of a tombstone in a cemetery as snow falls. It jumps down and runs through the cemetery. The tombstone was also a special platform on which the cat was placed and cued to stay. A trainer then stood off-camera and used a bait stick with a treat on the end of it to get the cat to walk or look in various directions. A trainer released the cat on its mark as another trainer called for it to run. The cemetery surroundings and snow were added in post-production.

A cat sits on a garbage can in an alley as The Spirit fights with a man who shoots at him. The cat was placed on a platform and filmed separately from the men and gunfire. As The Spirit goes into the river, the cat stands on the dock and looks down at the water as if it is considering jumping in after him (which it does not). A helicopter flies overhead looking for The Spirit. Again the cat was on a platform, and the water and helicopter were added in post-production.

A cat sits in a cage on a table. A woman removes the cat from the cage and carries it near The Spirit and The Octopus (Samuel L. Jackson), who squirts poison from a syringe into a cup of liquid. The woman places the cat near the cup and it drinks. She sets the cat in a small sink and the cat disintegrates — all that remains are two eyeballs. The eyeballs were fake and the cat disintegrating was computer-generated. The liquid in the cup was water and the syringe was a prop. The actors were instructed on the handling of the cat before filming.

In the dark, The Spirit shines a flashlight on the ground and sees a frog sitting there. The frog was placed on its mark in front of a green screen. The flashlight was briefly aimed at the frog, who was unfazed by the light. The surrounding woods and water were added in post-production.

As The Octopus watches a foot with a face on it hop around on the table, a strange cage next to him holds a white mouse, which sometimes crawls around in the cage during the scene. The cage was custom-made and created under the animal trainer's supervision, and the mouse was given time to become familiar with the cage before filming so it would be comfortable during the scene.

As a girl rides a skateboard, she passes a dog being walked on a leash. For this brief scene, a trainer handed the dog to the actor right before filming began, and the well-rehearsed actress on the skateboard was careful about where she moved.