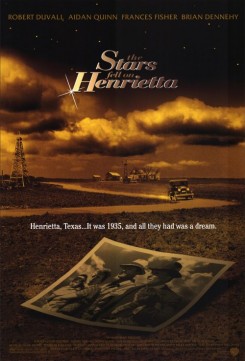 Stars Fell On Henrietta, The

The year is 1935 and Mr. Cox, a middle-aged con man, has been trying for years to convince people that there is oil in Texas. He believes there's a fortune to be made for everyone. Some have believed in him while others have simply laughed at him. Unfortunately, for those who have believed in him, oil has yet to be found. Through the years, Mr. Cox (who claims his first name is Mister) and his cat Matilda have traveled far and wide in their quest for oil. If he cannot smell it, Matilda can. However, in the past the money has always run out "just before" the strike has been made. After unsuccessfully trying to raise money to drill for oil in one Texas town, he and Matilda decide to hitch a ride to California with a couple of his old friends. At their first rest stop, they step out of the car to get some fresh air. After a few minutes, having sniffed the air, Mr. Cox decides to try to strike oil in Texas once again. Unable to talk his two friends into staying, he and Matilda go out on their own. While wandering down the road, a man by the name of Don Day stops his truck and offers Mr. Cox and Matilda a lift. Mr. Cox declines, so Don drives on. Moments later, a dust storm blows up and Mr. Cox is thrown off his feet and Matilda jumps out of his arms. Soon after, Don Day, who was concerned about Mr. Cox and Matilda in the dust storm returns and helps Mr. Cox and to search for Matilda. When they find her, Don insists that Mr. Cox and Matilda come home with him to rest, bathe and have dinner. After Mr. Cox discusses his feelings about oil in Texas, Don and his wife, Cora, decide to invest in the drilling. Mr. Cox is more positive than ever that oil will be found. Deals are made with the banks and equipment is rented. Excitement is in the air as the town breathlessly awaits the oil. A few weeks go by and no oil has been found. Equipment rentals have expired. Discouraged and angry, the Days ask Mr. Cox to leave. Matilda and Mr. Cox make their way into the town of Wichita Falls. After they have been in town for awhile, Mr. Cox looks up some of his old friends in hopes that he can pursuade them to invest in his latest venture. When absolutely nobody is interested, Mr. Cox resorts to stealing the money from one of his adversaries at a poker game. Although nobody can prove it, they all suspect it was Mr. Cox. Now that he has money to continue with the drilling, Matilda and Mr. Cox head back to the Day's land in Henrieta. After a few days, we finally see a little trickle and then a genuine oil geyser comes bursting out of the ground. The town prospers as 2,400 barrels of oil come in each day. In the end, Mr. Cox and Matilda get restless for the open road and leave everything behind. However, this time they leave in a new car, headed for California.

Mr. Cox and Matilda are inseparable. Matilda is his best friend. Thus, we see Matilda with Mr. Cox in most of the film. Mr. Cox often hugs and cuddles Matilda as he speaks to her. In one scene, he carries Matilda over his shoulder. To keep the cat on his shoulder, the trainer stood just off camera with a clicker which she used to keep the cat's attention. In another scene, Mr. Cox loses his balance, Matilda jumps from his arms and becomes lost in the dust storm. Later, she was found nearby hiding in a thicket. To accomplish this scene, the trainer, again, just out of camera range, was holding the cat by a string. After the Days agree to finance the oil drilling on their property, Mr. Cox is elated. In celebration, he carries Matilda out to the field where he tosses her up in the air. The cat. was not harmed. In other scenes, we see horse drawn wagons and carriages, which are commonplace at this time. There is also a scene with a horse in a stall.. When Mr. Cox and Matilda arrive at the Day's ranch, there is a dog sitting on the porch watching them. The dog is also seen in another scene following one of the Day's daughters.