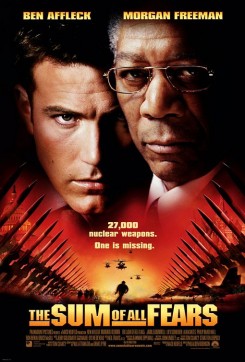 Sum of All Fears, The

European neo-Nazi terrorists get their hands on a lost nuclear device and frame Russia for the US blast, in the hopes of rekindling the Cold War. Luckily, young CIA analyst Jack Ryan, played by Ben Affleck, is hot on the trail of the culprits.

A scorpion crawls along the sand in the desert. A trainer placed the scorpion on the ground and it crawled without any prompting. The trainer retrieved it afterwards.

A donkey, a sheep, and a goat are in the background of several brief scenes. Trainers placed the animals on their marks and stood off-camera to supervise.

In one scene, as three dogs chew on a dead body, a man enters the room and shines a flashlight on the dogs, prompting them to growl. The dead man was actually the dogs' trainer, who cued the dogs to knaw on his clothes, which were layered above thick padding. The growling sounds were added in later in post-production.

In another scene, a cat lies on a bed. A trainer placed the cat on the bed and stood off-camera to retrieve the feline once the scene was complete.