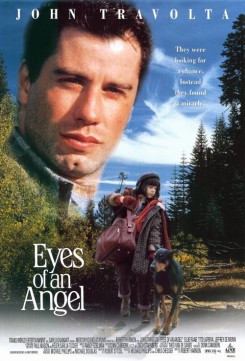 The Tender is a story about the love and devotion between an abused and abandoned dog and a lonely young girl. The film opens in an elegant Chicago mansion where people are engaged in various forms of gambling. In one smoke-filled room a dog fight takes place between a Doberman and a Pit-Bull. The Doberman loses and, near death, the badly injured dog is taken to a bridge and dumped into the watery grave below. Somehow he manages to swim ashore and collapses amid trash in a seedy neighborhood. He's discovered by a young girl, called The Tender, who nurses him and brings food to him. Although slow to trust humans, a bond develops between this pitiful dog and this lonely, motherless girl. Nearly recovered, he attempts to follow the girl home through city streets and onto elevated train tracks where he's captured by animal control officers and taken to the city pound. He escapes the pound by jumping through a glass window and finds his way to The Tender's shabby apartment where she lives with her father. Her father, Bobby, is still mourning the death of his wife and has difficulty holding a job. He accepts a job from his brother-in-law, a shady character who entangles Bobby in a phony deal because he wants custody of The Tender. Bobby decides to flee with his daughter to California and, ignoring The Tender's pleas, abandons the dog in a junkyard. Once more the dog escapes and begins a cross-country odyssey to seek the one person who has shown him love and kindness.

The dog fight scene was shot in cuts, filming the dogs both separately and together. So that no harm could come to them when they were filmed together, they were fitted with plastic-coated muzzles. The muzzles blended with the dogs' fur and could not be detected by the camera when the dogs were moving. The Doberman's "injuries" were achieved via stage makeup and where he's dumped from the bridge, a fake dog was used. For his swimming scenes, an underwater camera filmed him swimming in a heated indoor pool. As he follows The Tender home, all traffic was carefully controlled. The scenes on the elevated tracks were shot in cuts and the dog was never close to a moving train. Filming was done on an area of tracks where the city of Chicago was making repairs and the electricity was closed down. Plywood filled in any gaps between the tracks. Where the scene involved a moving train, the dog was on the platform. Real animal control officers, not actors, pretended to struggle with the dog who had been taught to go after the stick. The glass he jumps through in his escape was made of harmless candy glass. During his cross-country trek, the hungry dog chases a rabbit. This scene was shot in cuts with the rabbit unaware he was fleeing a dog because he was really just running to a food reward. The dog was also filmed running from point A to point B where he received a food reward. Where the dog encounters a rattlesnake, both a real and fake snake were used. When the real snake was used it was filmed separately. Where the dog and snake are together, a fake snake was used. The fake snake's movement was achieved with an air gun. In the film's climax the dog settles some old scores by attacking the villain. This scene was shot in cuts with the dog performing controlled, trained actions with a stuntman and trainer.