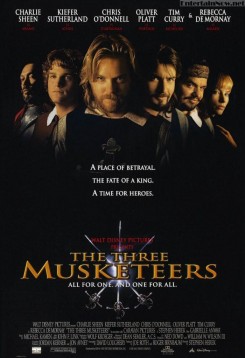 In this remake of the legendary action-adventure yarn, all the favorite Dumas characters appear. There's the cynical Athos, the wise Aramis, Porthos the womanizer, and the wide-eyed D'Artagnan, who yearns to be a musketeer like his father. They embark on their adventure, which includes the beautiful, but dangerous, Countess DeWinter and the villainous Cardinal Richelieu. Somewhere between all the swashbuckling, dueling, and flirtatious affairs, they manage to save their King from assassins and save the kingdom from the evil Cardinal who aspires to rule. King Louis rewards D'Artagnan by dubbing him a Musketeer. He joins his three comrades and together they declare their motto "All for one and one for all."

Horses are ridden in many scenes or pull carts or wagons. There is a scene in which the Musketeers save D'Artagnan from an imminent beheading. The Musketeers rescue him and drive off in the Cardinal's carriage, which is pulled by four horses. A chase scene follows in which horsemen pursue the speeding carriage. As they are racing through the village, D'Aratagnan spots a box containing gold coins on the floor of the carriage and tosses the coins out the open window. As the villagers scramble to collect the gold pieces, they impede the pursuing horsemen, causing the horses to rear up and their riders to fall off. This was accomplished by trained rearing horses and stuntmen who did the required saddle falls. Several horsemen continue to pursue the Musketeers' carriage. When they get to the top of a hill, our heroes stop the carriage and Porthos unhitches the horses. He then sets fire to gun powder inside the carriage and the flaming horseless carriage careens back down the hill towards the pursuing horsemen who scatter, and jump out of the way as the flaming carriage blasts in between them. That entire chase sequence was filmed in many cuts, each stunt being filmed separately. Horse rears were performed by trained rearing horses. The flaming carriage was never close to any horses, but maintained a safe distance. Camera angles made the carriage appear to get closer than it actually did. In another scene, as the Musketeers are riding across an open field, they are fired upon by the Cardinal's men, who are in a nearby castle. Cannon balls explode around them as they race for the safety of the dense forest. D'Artagnan and Athos gallop into the forest where they are pursued by horsemen who fire their guns at the musketeers. Athos' horse is struck by a bullet and falls, as Athos goes down with the horse. This scene was performed by a trained falling horse and there is no depiction on screen of the horse being hit by a bullet. A stunt double performed the fall for the actor. In other animal action, a message is attached to a pigeon and the bird flies off. Chickens are present in several scenes as background and atmosphere. Goats also appear as background and birds chirp in a bird cage adding to the picturesque setting.