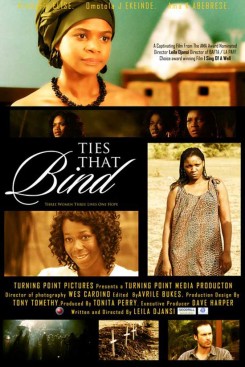 Tie That Binds, The

John and Leanne have a daughter named Janie. While riding in the car on the highway one evening, Janie announces that she is hungry. All at once, we see Leanne in a kitchen, pulling food out of a refrigerator. However, it's not her kitchen or refrigerator, as we learn when an elderly couple ask her to leave their house. As the couple speak, John comes into the kitchen with a big knife and an old bottle of wine. He ties the couple up, and before they leave, John kills the couple. As John and Leanne attempt to leave, the police who have somehow been notified, drive up. John grabs Leanne and they start running as the police start shooting. In the meantime, one of the police tries to coax Janie out of the car. While John and Leanne get away, Janie is left behind to be taken into custody. We next meet Russ and Dana Clifton, a childless couple who have volunteered to be foster parents with the hopes of adopting a child of their own. Both of them are well educated and have successful careers. As they enter the Health Resource Center, they are escorted into a room where refreshments are being served for the many visiting potential foster parents and the children who need help. Russ and Dana are introduced to a couple of different children. A little girl, Janie, comes running up behind Dana, and then runs out of the room. Dana follows Janie and the two of them begin to bond. Later that day, the new family go home. At first it is difficult, as Janie seems so unhappy. She never smiles, and Russ and Dana have gone out of their way to make her feel comfortable. Dana, a professional commercial photographer, takes Janie with her on some of her shoots. Janie enjoys herself and discovers lots of new and exciting things in this new world of hers. She begins to feel more comfortable when Dana gives her an old stuffed rabbit she had when she was a child. Janie names the stuffed rabbit Mr. Flip Flop. One evening, while Janie and Dana are out, Russ notices drops of blood and a knife on Janie's bed. At about the same time, Dana notices the cuts from the knife on her hand . After being treated for the wounds, Dana decides to find out more information about Janie's birth parents. It is then that they learn how sadistic these people are and why Janie has acted the way she has. Meanwhile, Janie's birth parents are searching for her as well.

In one of the first scenes, while Janie's parents are in the older couple's house, a firefly hovers around the car. Janie watches it as it appears to be watching her. She finally gets out of the car and starts chasing it.. In another scene, John and Leanne are in another strange house and a bee buzzes around and lands on a window. John is annoyed with the bee, so smashes it with his hand. In both scenes, special effects were used instead of the real insects. Dana and Russ take Janie to see their new house, which has not been completed. While they are wandering around the house, a deer walks up close to them and stands, unaware that they are inside. For this scene the trainer placed the deer in position and cued it with hand signals to stay. Janie's birth parents catch up with her and the Cliftons while the three of them are looking through their unfinished new house. Janie hides and sneaks away. John sees her and follows her. As Janie runs away from John, a flock of pigeons fly up. The birds were homing pigeons so when the trainer released them, they merely flew home. An owl sits in a tree. The trainer had placed the owl on a tree branch and secured it with monofilament that could not be seen by the camera. The trainer then moved back and forth off camera to get the owl to turn its head. When Janie runs from her birth father, John, Mr. Flip-Flop gets stuck in a tree. Janie tries to free the rabbit, but John is still chasing her, so she runs. Janie hides near the tree. When she looks up to see Mr. Flip-Flop, a real bunny jumps out and wiggles it's nose at her. Janie follows the bunny right to her father who knew she would. To accomplish this scene, trainer A released the rabbit who ran to trainer B who was just out of camera range enticing the rabbit with food. To make sure the rabbit would not escape, the scene was filmed in a fenced in area.