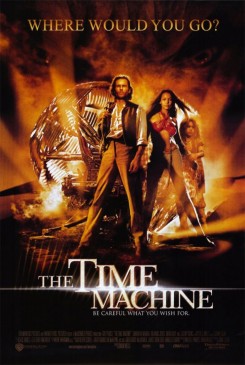 Hoping to alter the events of the past, a 19th century inventor instead travels 800,000 years into the future, where he finds humankind divided into two warring races.

Throughout the beginning of the film, many horse-drawn carriages and riders on horseback trot through snowy London. The horse carriages were driven by experienced drivers and the single horses were ridden by professional wranglers. The traffic of carriages and horses was carefully choreographed and well-rehearsed for the safety of both the animal and human actors. For the scene in which a character is hit by a carriage horse gone awry, a trained rearing horse was used. Since the terrain was deemed a bit too icy to film this scene in New York - the original London set - a replica set was built in Los Angeles and the scene was filmed there.

The brightly-colored lizard that hisses at Alexander in the Eloi village was a chameleon. Trainers placed a tiny amount of water on its tongue to prompt the lizard to open its mouth, and hissing sound effects were added later in post production.

Also appearing in the village is a mammal called a Binturong, a rare native of Southeast Asia, more commonly referred to as a "bearcat," perhaps because binturongs walk flat-footed like bears. An arboreal animal - meaning it lives in the trees - binturongs have black fur, can weigh between 30 to 40 pounds, and from head to tail they are 46 to 73 inches long. The binturong has a keen sense of smell, as well as good vision and hearing. For the film, a trainer dressed as an Eloi villager carried Ninja, a 2 year-old female binturong, on his shoulders in the background of several scenes.

The spider spinning a web on the time machine was computer generated, as were the bats in a later scene.

The couple fishing in a boat seen on the Lunar monitor was stock footage.

The caged bird seen during Alexander's family dream sequence was a fake prop.