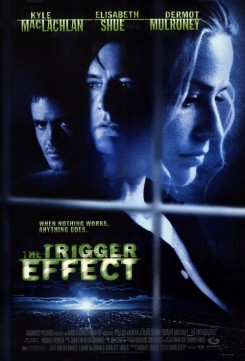 The Trigger Effect is a film about the pandemonium that takes place during a black-out in a major city and how it effects the lives of Matthew and Annie, a married couple, and their friend, Joe. All forms of communication are out and no one knows what caused the power outage. The only way a person can purchase anything is with cash, since all the ATM and credit card machines run by electricity. In desperation, people start looting stores, robbing houses, and committing numerous other crimes. Matthew ends up being one of those desperate people when his baby daughter needs some medication for an ear infection. The doctor failed to call in a refill before the black-out occurred. Therefore, the pharmacist refused to give Matthew the medication. After going to the hospital, his last alternative, and failing to procure the medication, Matthew goes back to the pharmacy and steals it. This is just the beginning of the domino affect that takes in the young couple's life. Many people, including the couple and their friend, attempt to flee the city in search of some type of outside communication. Their lives are forever changed after surviving the days of the black-out.

In the beginning scene, two coyotes are seen dining on what looks to be a dead animal of some kind. Then one of the coyotes is seen running in front of a power plant sign. For the segment of the coyotes eating a kill, two trainers simultaneously released the coyotes from their cages. Each coyote was controlled with a waist chain. The animal that they dined on was actually a stuffed animal with meat inside and food coloring used for blood. When the coyote is seen walking in front of the power plant, he is merely walking A to B. Other animal action consists of a crow, a raccoon, and two dogs. There is a scene where a raccoon is seen walking across the couple's front yard and sets off the motion security light above the garage. When the trio is on their way out of town they stop on the side of the road and a crow is seen sitting on top of a dead tree. The crow then squawks and flys off. The crow was trained to fly from one point to another prior in the scene. In the final scene of the film, Matthew is seen driving down the cull-desac towards his home. We see two dogs being chased down the sidewalk by a woman holding two leashes. The dogs were the pets of the director's wife and the producers wife and daughter.