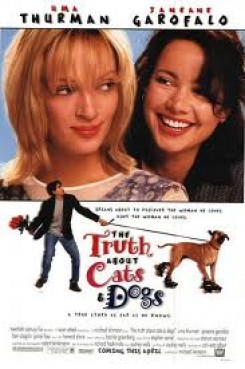 Truth About Cats and Dogs, The

The Truth About Cats and Dogs is a romantic comedy set in Santa Monica, California, featuring Abby, a veterinarian with a successful radio talk show, "The Truth About Cats and Dogs". One morning while on the air, she gets a call from a man who says he has an angry dog on roller skates and he doesn't know how to calm him down. After further questioning, Abby finds out that the man's name is Brian and that he is a photographer attempting to do a photo shoot with the dog. Abby successfully talks Brian through the steps of calming the dog and then informs him of the proper procedures in caring for his new found friend. The next day Brian calls Abby at work, wanting to know if he and Hank, the dog, can take her to dinner. She agrees to meet him, but when he asks her to describe herself she describes her pretty blonde neighbor, Noell. Having done this, there is no way she can meet him as she feels he would be disappointed. Therefore she never shows up for their dinner date. The next day Noell visits Abby at the station. Brian sees her enter the building and thinking she is Abby follows her. When the receptionist calls to tell Abby she has another guest and that guest description matches Brians, Abby starts to panic. She has Noel sit in her chair and tells her how to let Brian in the booth so that he will think she is Abby. When introductions are made Abby introduces herself as Donna. After light conversation they all agree to meet later for drinks. The deception has started and the big question now is, how does Abby tell Brian the truth.

There is a scene where Hank is on roller skates moving across the floor as Brian tries to photograph him for a shoot. The animal had been slowly trained over a three month period so that he would be comfortable on the skates and with the rolling motion. The sequence was filmed in cuts. The appearance of the dog skating was accomplished in several different ways and from different camera angles. Special skates had been made for this particular dog. For most of the sequence, the dog was gently pulled by his trainer using monofilament leads attached to the front of the skates. The boot part of the skate was padded with foam and secured to the dog's foot with Velcro. The wheels of the skates had adjustable fittings which enabled them to move either only forward or only backwards depending on the effect needed. In some shots, a security bar was also used so that all four skates would move as a single unit. For a portion of the scene, the dog was fitted with boots that were fakes or "facades". The hind paws touched the ground with a skate mold or shell used to cover the paw. For the prepping, a chest harness along with a hind quarter sling provided the animal with additional support. In some shots, the dog actually walked from point A to point B, simulating skating, and responding to his trainers' voice and hand commands with food as a reward. There is a shot in which the dog appears to be skating in circles. For this scene the dog was not actually wearing skates. The scene was accomplished with the dog in a wooden wagon-like dolly. It was fully carpeted. The trainer used a heavy rope to pull and turn the dolly. The floor had been padded with linoleum placed on top to provide a soft but smooth surface. In one scene, Abby and Noell are at Brian's apartment when his neighbor, a little girl, visits. She brings her sick turtle with her because she has heard that the lady from the radio show is at Brian's. Her turtle refuses to stick his head out of his shell, so Abby shows them what to do. Abby puts on a glove, sticks her finger up under the turtle's tail and his head comes out. The scene was shot in cuts. When the little girl first shows them her turtle, his head is inside his shell. To accomplish this, the trainer kept the turtle at a cool temperature which makes the animal naturally keep his head inside. Four desert tortoises were used in rotation for this scene. For the close up of the turtle's head popping out of his shell, the trainer first placed the turtle on a towel on the table and gently placed his finger on the turtle's head. This made the turtle pull his head into the shell. As the trainer took his finger away the turtle brought his head back out of the shell. In a separate shot, the actress, with a glove on, simulated the action of pressing her finger into the turtle's rear area. When the turtle's head is seen coming out, all that is seen of the actress is her hand behind the turtle. The actress' finger never actually came in contact with the turtle. In the scene when Brian and Hank are at the radio station, Hank walks over to Abby putting his paws on her chest. She then pets the dog. The trainer had released the dog and used voice commands to get the dog to go to his mark. The actress had a piece of food in her hand and rewarded the dog. There are several other scenes where the dog is seen licking the face of an actor. For these shots, a small amount of peanut butter was placed on the faces to be licked and the trainer gave the dog hand and voice commands. There was other animal action involving a cat and dog which was very mild. There are several scenes where the cat or dog is seen either on the sofa, on the kitchen counter, or lying on the bed, etc. For these scenes, the trainer merely placed the animal on his mark and got him to "stay" by using hand and voice commands with food as a reward.