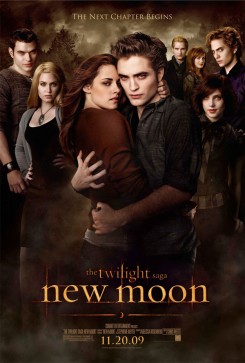 Bella (Kristen Stewart) celebrates her 18th birthday with her true love, the vampire Edward (Robert Pattinson). When he suddenly breaks her heart and disappears, she becomes depressed, confused and threatened by other vampires, and she starts falling for Jacob (Taylor Lautner), who promises to protect her.

The wolves in this film were all computer-generated imagery (CGI), except one timber wolf that was filmed for a brief dream sequence. The wolf is seen in the forest at night with blood on its mouth while it stares at Charlie (Billy Burke), who is lying on the ground. The wolf and actor were introduced to each other before filming so they would be familiar with each other. The wolf was brought to a holding area near the scene before filming so it could become familiar with the environment. The area was a secured, enclosed part of the set and only limited cast and crew were allowed in the area. Trainers placed a waist tie on the wolf. The tie was attached to an eyebolt on a stake, which was screwed into a tree stump. An off-camera trainer controlled the waist tie and stood near the wolf, cueing it to look in certain directions. The actor simply lay still on the ground, which did not bother the wolf. A nontoxic fake blood (made of corn syrup) was placed on the wolf's muzzle and removed after filming. After this brief scene, the wolf was rewarded with food.

American Humane also monitored a deer and some centipedes, which were cut from theatrical release but might come back on DVD.

New Moon does not carry the "No Animals Were Harmed" disclaimer at the end of the film because the production did not give American Humane a pre-release screening of the film, which is one of the requirements for issuing the disclaimer.