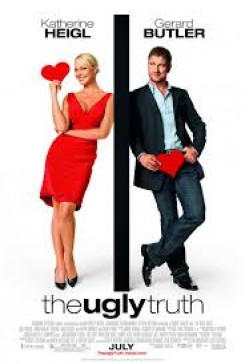 Abby (Katherine Heigl) is the producer of a television show and can't find love. Mike Chadway (Gerard Butler) is an opinionated television personality who speaks about relationships and how to find the right person through manipulation. The fun begins when they start to work together.

Abby (Katherine Heigl) has a pet cat. The grounds were checked ahead of time for safety and the cast and crew were instructed on the animal's proper handling. For scenes in which Abby or Colin (Eric Winter) pets or holds the cat, the cat enjoyed this mild action, and the actors were well-rehearsed for it. In one scene, the cat lies on a bed and paws a TV remote. Abby pets it, picks it up to hug it and sets it back down on the bed to pet it some more. Moments later, the cat's head is in a fishbowl on top of a counter. A crash is heard and the cat is seen by the broken fishbowl. The fishbowl had a vertical cylinder inside it with some cat treats in it. The cylinder kept the cat away from the actual goldfish thatswam in the bottom part of the bowl. The fish were removed before the bowl was manually tipped over. Nonhazardous "candy glass" was scattered on the floor to look like broken glass and the cat was placed near it. In the next part of this scene, the cat goes out a nearby open window and climbs up a tree. Abby climbs the tree to retrieve the cat, but as she holds it, she gets distracted by her sexy neighbor, slips and drops the cat to the ground below. The cat is then on the ground looking up at Abby, who hangs upside down from a branch. For this scene, one trainer hid behind the tree and called to the cat, which was released by another trainer across the courtyard. The cat ran to the trainer hiding behind the tree. The trainer picked up the cat and handed it to another trainer standing on a ladder. The trainer on the ladder placed the cat on a nearby branch where some cat treats were waiting. Padded stunt mats were placed on the ground in case the cat fell, which it did not. The actress stood on another ladder nearby and picked up the cat from the branch to hold and pet it. For the shot of the cat dropping to the ground, the actress handed the cat to the nearby trainer before she fell from the tree, and then the trainer held the cat a few feet above the ground and gently dropped it to the ground. The trainer on the ladder held a bait stick to get the cat to look up as if it was looking at the actress hanging in the tree.

Whenever the cat is on the bed with Abby, trainers placed the cat on its mark and allowed it to walk around the secured set and relax, be petted or do whatever came naturally. For the shot in which the cat rubs up against a gift bag, the trainer set the cat down by the actress and it did whatever it wanted to. For the scene in which the cat comes down the stairs and jumps up on a chair, one trainer at the top of the stairs released the cat and another trainer stood by the chair and called to it, and rewarded it with a treat.