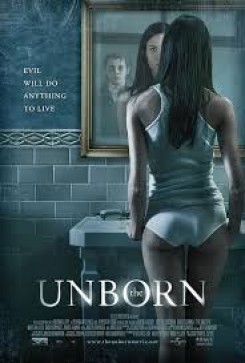 Casey (Odette Yustman) discovers that she had a twin brother who died right after they were born. She believes he is contacting her but is not sure why.

While jogging, Casey (Odette Yustman) sees a young boy standing in front of her wearing a creepy mask. She looks again and the boy has turned into a dog wearing the creepy mask. The dog begins to walk away. Later Casey looks across the street and sees the same boy and dog, which is still wearing the same mask. A city bus passes, blocking her view, and when she looks again, they are both gone. The lightweight mask, which was made of papier mâché, was padded on the inside for comfort and was attached to the dog with elastic and string so it fit comfortably. The dog was well-rehearsed to wear the mask and was not fazed by it. A trainer put it on right before cameras rolled and removed it immediately afterward. The dog was filmed separately from the child, who was added in later in post-production. A trainer brought the dog to set on a leash, which remained on the dog the entire scene — the leash was taken out of the picture in post-production. Traffic was limited and controlled by crew members.

Later, the same dog is standing with its head on upside down, barking and growling at a man. This scene was filmed in separate shots. First, the dog was filmed in front of a green screen without the actors present. The trainer put the dog on its mark and stood off-camera, cuing the dog to look in a certain direction or bark and growl. To get the dog to walk away, the trainer cued it to "come" and rewarded it with a treat. To get the effect of the dog looking like its head is upside down on its body, separate shots were filmed. A table covered in pillows was secured to the ground in front of a green screen. The dog was placed on its back in the middle of the pillows and positioned at such an angle as to tip its head back. The dog's body (all but its head), table and pillows were covered with a lightweight green blanket in order to be digitally removed later as part of the green screen process. Several trainers helped support the dog and petted and praised the dog while the entire scene was filmed with its head somewhat upside down. The scene was then re-filmed with the dog upright, and the two segments were combined in post-production.

Later, Casey jogs past a woman walking a dog on a leash. The owner of this dog doubled as the actor for this brief and mild action.

When Casey breaks an egg into a frying pan, an insect comes out of the egg and hops in the pan, causing her to throw the contents of the pan down the garbage disposal. Before filming, a real egg was cracked and the white was removed. After a caramel coloring was added to the yolk, the eggshell was then resealed with beeswax. A large hole was made in the top of the egg, where a potato bug was loaded using a large syringe case. Moments before filming, a trainer held the syringe case up to the egg hole and the bug was allowed to walk through the case into the partly hollowed egg. The egg was handed to the actress, who carefully cracked it right above the pan, which had been cooled before this portion of the scene. As soon as the bug naturally hopped on the pan, the trainer removed it and cleaned it off. The live bug was then replaced with a fake bug before the actress threw the contents into the garbage disposal.

Later as Casey sits in class, she scratches her head and when she looks at her hand she sees a bug crawling on it. Then it crawls onto her notebook, causing her to bump it onto the floor, where she steps on it. This scene was filmed in separate shots, using both a real and a fake bug. A trainer glued the fake potato bug on the actress' hand before she scratched her head. For subsequent shots, the trainer placed the real bug on the actress' hand and then on the notebook and let it crawl a bit. Some padding was placed around the desk in case the bug fell, which it did not. The real bug was replaced with the fake bug for the part of the scene where it falls on the floor and Casey steps on it.

Casey is in the restroom at a club and runs out of the stall screaming as we see bugs coming in from the toilet behind her. They begin to cover the sink, floor and walls. Before filming, cellophane was placed over the toilet. Trainers brought a handful of potato bugs, set them in individual containers and put them on the cellophane and the floor near the toilet. The bugs were filmed naturally crawling around. Later, the trainers placed about 50 bugs on a green screen floor with foam sides, and the cameraman filmed the bugs crawling around. These bugs were then combined and multiplied in post-production, making it appear as if there were thousands of bugs in this scene.