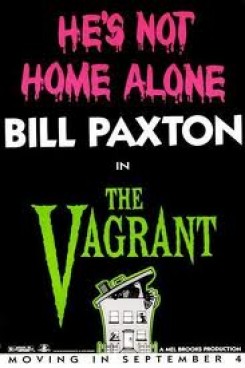 The Vagrant is the very bizarre story of Graham Krakowski, a quiet young man with a promising career in the accounting profession. After much planning, Graham has decided to purchase his own home. After seeing property after property, the real estate agent finally persuades Graham to buy the last property he looks at, a real "fixer-upper". Much to his dismay, Graham finds that the house has been inhabited by a vagrant. Graham installs a series of burglar alarm systems in order to keep the vagrant out of his newly purchased home, but each night after a troubled sleep, in which the vagrant appears, Graham discovers yet another piece of evidence indicating that the transient was indeed in his abode. All of Graham's friends and aquaintances are becoming more and more concerned with his irrational behavior and paranoia, as none of them have seen this supposed vagrant.

One night Debbie, the real estate agent who sold Graham the house, comes for a visit and spends the night with Graham. The next morning her body is found dismembered in a dumpster across the street from Graham's house and Graham has no recollection of what happened. Graham is now arrested for a murder he didn't commit...or did he? The story takes us through a series of murders and mayhem, for which everyone concerned is convinced that Graham is responsible.

In one scene as Graham awakens from another disturbed sleep, he is aware of a foul smell. He descends into the basement searching for the source of the stench and discovers a dead rat lying beside a box of rat poison. This was a fake rat.

In another scene Graham's neighbor is taking his clothing in from the clothesline. We hear a scream of horror and we see that the man has discovered what is supposed to be his dog, which has been dismembered, hanging on the clothesline. This was a fake prop, not a real animal. The real dog is seen briefly in previous scenes lying down and being petted.

During a scene when Graham is chasing the vagrant through a haunted house in an amusement park, an iguana lands on Graham's shoulder. The iguana was dropped a very short distance by it's handler, who was just out of camera range, onto the actor's shoulder. The animal was never harmed.

In a scene as Graham is preparing to leave for work, he goes into the kitchen and finds a dead fish hanging over the stove. The fish used was a fake rubber fish.

In another scene we see blurred images of stuffed animals hanging on a wall. These were taxidermied animals rented from the Cowtown Museum of Phoenix Arizona.