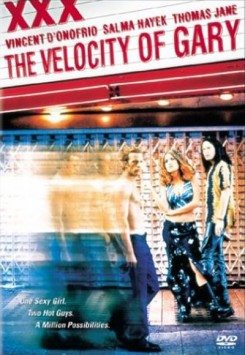 Velocity of Gary, The

There is a dog used throughout the movie called "Rodney", a boarder collie mix who belongs to Valentino. Rodney appears in various scenes throughout the film. At one point, he walks up to Gary, who is sitting on a curb, and sits down next to him. In another scene, Rodney lays on the floor next to Valentino and Mary-Carmen in a public building. For this scene, the trainer placed the dog on its mark and told it to stay.

During a Halloween parade, we see Rodney walking across a street full of people dancing and partying. Rodney is wearing devil horns on his head. At another point during the parade scene, we see another dog, a golden retriever who is wearing some type of harness with two fake dog heads attached to it (to appear as if the dog has three heads).

A puppy is also used in the film in a flashback scene where Valentino meets Rodney for the first time. We see an actress hand the puppy to Valentino.

In another scene, Valentino opens the door to his apartment and peers out into the hallway. We see a big white fluffy cat walking down the hallway toward Valentino.

At various points in the movie, Valentino is hospitalized. During one of his stays in the hospital, Rodney, the dog, runs away. We see Rodney, dirty and tired wandering the streets. In one scene, Rodney is walking down a street, and he comes upon a dead dog lying by the side of the road. Rodney sniffs the dog and then keeps on walking. For this scene, the trainer sent the dog over to the stuffed "dead" dog, which was a prop, using voice and hand commands.

In another scene, Rodney crosses paths with a homeless woman who bends down and offers him some food, which she holds out in her hand. After Rodney licks her hand, the woman picks him up and walks away. This scene was achieved with two trainers. One trainer released the dog and another trainer called the dog to the actress. The actress then pets the dog and picks it up.

At the end of the film after Valentino dies, we see Mary-Carmen and Gary leaving the hospital. Outside of the hospital sit Rodney and the homeless woman. Rodney barks at Gary and Mary-Carmen who run over and pet him and look him over to see if he's all right.