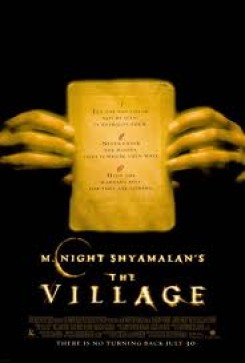 At first glance, the village seems picture perfect, but this close-knit community lives with the frightening knowledge that creatures reside in the surrounding woods. The villagers have an agreement with the creatures: if they stay out of the woods, the creatures will stay out of their village. But when curious, headstrong Lucius Hunt (Phoenix) plans to step beyond the boundaries of the town and into the unknown, his bold move threatens to forever change the future of this isolated rural community.

The film's producers had sheep, cows, chickens, turkeys, goats, geese, and pigs on hand to enhance the pastoral background. Trainers accompanied each animal group, and two Border Collies were used to help keep the sheep in order. American Humane's Animal Safety Representatives made sure all the grounds and fencing were checked for debris and trip hazards ahead of time so that the animals would be safe.

Trainers scattered food to occupy the livestock and then stood off camera during filming. In an early scene, a herd of sheep follows one of the villagers through a field as she carries a bucket of feed. A trainer doubled as the actress for this brief shot, and the Border Collies followed close behind the herd as they walked.

Ad-Lib with a Frog

When Noah (Adrien Brody) shows Ivy (Bryce Howard) some berries he has picked, he surprises her with a small frog crawling in his hand. With the cameras rolling, Brody picked up the frog as he went to get the berries. Director Shyamalan liked the ad-lib and decided to keep it in the film. After completing the shot, Brody released the frog in the field where he found it.

The April 30, 2004, issue of Entertainment Weekly includes an article on The Village with quotes from actor Sigourney Weaver. Weaver explains that, in order to prepare for the film, "We all lived in these tents and ate communally…We learned how to weave, how to spin, how to hew logs…I wasn't one of the ones who had to decapitate a rabbit, for which I am grateful."

When screening the film, American Humane asked producers to respond to the issue of decapitating rabbits as part of that preparation. The producers explained that the quote was not true and that Weaver was merely being "colorful" in the article and "trying to spice things up." Since American Humane's Animal Safety Representatives saw and photographed a multitude of dead animal props, and the Film & TV Unit received appropriate documentation and receipts, American Humane believes the quote was for publicity only.