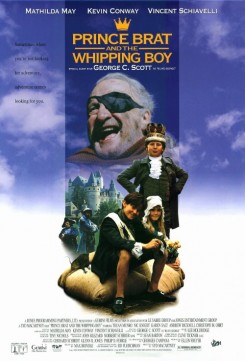 The Whipping Boy is a delightful tale about Jimmy, an orphaned street urchin, and Prince Horrace of Ratenburg. Jimmy is twelve, street wise, polite and respectful to his elders. Prince Horrace is twelve, spoiled, bad tempered, rude and devious. Jimmy catches and sells rats to earn money in order to take care of himself and his sister, Annie Rose. One day while on their way to sell their rats, they are almost overrun by a carriage belonging to the Prince. The next day, Jimmy is captured by the Prince's soldiers and taken to the palace to become the new whipping boy for his majesty. Unfortunately for Jimmy, the Prince is always in trouble, such as when he puts rats in a dish served at a formal dinner or loosens the strap on a dignitary's horse before a fox hunt. Jimmy is determined to escape because Annie Rose does not know what happen to him, or how to take care of herself. Unbeknownst to Jimmy, at the time he is planning his escape, Annie Rose has been accused of stealing and is brought to the castle for sentencing. In the mean time, the Prince also decides to run away after the King has him receive his latest punishment himself instead of Jimmy. The two boys run into each other while attempting to escape and decide to join forces. The Prince takes a horse and disguised, the boys ride past the guards and out into the woods. The two experience many adventures together while trying to rescue Annie Rose from prison. They are kidnapped by highwaymen, manage to escape, but are captured again and then rescued by a woman and her bear. During their adventure, Prince Horrace learns a lot from Jimmy about real life and what being a twelve year old is really like. In the end, it is the Prince who saves Annie Rose by convincing the King to pardon her and adopt Jimmy and his sister.

The animal action consists of some rats, a dog, horses, a fish and a bear. Horses are seen being ridden throughout the movie, pulling carts or carriages and tied to a hitching post. The bear is seen doing a variety of behavioral tricks such as standing on his hind legs, sniffing at food in a basket, growling, running through the woods, and riding in a gypsy wagon. The dog is seen in a tavern either lying down, sitting, or being held by the actor. Animals such as goats, chickens, etc. are seen in the village as background atmosphere. There are several scenes involving rats such as in the sewer, on the backs of the highwaymen as they exit the sewer, in cages as Jimmy and other boys carry them throughout the village and scurrying onto a table from out of a covered dish as the lid is lifted. The Whipping Boy was filmed in England. American Humane made repeated attempts to contact the trainers, all of whom reside in the United Kingdom. We have received no response.