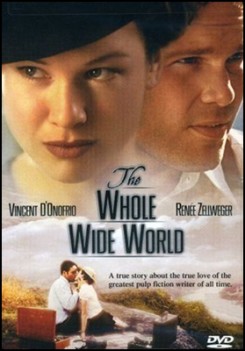 The Whole Wide World is a film based on a true story about the life of Robert E. Howard, the creator of Conan The Barbarian. Novalyne Price is a school teacher, aspiring to be a writer, when she meets Robert. Robert did not have a social life before Novalyne, which could partially be blamed on his attitude towards life and people. Most of the towns people thought he was a strange individual and avoided his company. Disregarding all of his shortcomings, Novalyne and Robert become friends and share many happy moments together. The only problem with their budding relationship is Robert's ailing mother. Robert is constantly taking care of her and his mother uses her illness to control his life. When Novalyne falls in love with Robert she starts to show her affection for him. He informs her, however, that "The road he walks, he walks alone." It is at this point in their relationship that Novalyne realizes there is no hope for a commitment from him. Robert cannot commit to anyone but his mother because he feels that her love inspires him to write. Shortly after this revelation in their relationship, Novalyne is accepted into graduate school at Louisiana State. When she tells Robert, he finally realizes that he loves her and needs her. Unfortunately, she cannot now give him what he needs because she has lost the passion she felt for him. The only thing she can offer is her undying friendship. Three weeks after arriving at college Novalyne receives a telegram from a mutual friend of hers and Robert's. It seems that the doctor has told Robert and his father that his mother is going to die soon. Since the love of his mother inspired him to write, Robert decides he cannot live without her, so he takes his own life. Even though Robert is now gone, Novalyne will always remember him and feel enriched from knowing Robert E. Howard.

There is a scene where Robert takes Novalyne on a picnic in the mountains. She is walking along a path when she turns and sees a wolf standing in an open area looking at her. She turns her head to look for Robert and when she turns back, the wolf is gone. For this scene the trainer used verbal commands to cue the wolf to stay. Other animal action consists of two horses pulling a wagon down a road in the town.