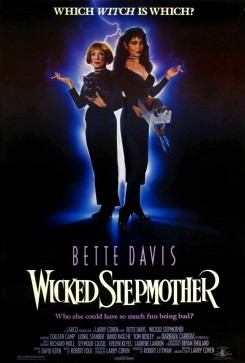 As this comedy-fantasy begins, the police are searching for a con artist whom they describe as a wicked old woman possessing strange powers. On her last caper, she robbed a family after shrinking them to a size small enough to fit in a shoe box. When a husband and wife arrive home after a two week vacation in Hawaii they are dismayed to find that their elderly widowed father has remarried. Jenny, the wife, takes an instant dislike to her new step-mother, Miranda, (played by Bette Davis). Miranda has changed her father and upset their lifestyle and Jenny complains to a photo of her mother who looks remarkably like Joan Crawford! To make matters worse, Jenny is convinced Miranda is keeping a cat and Jenny is highly allergic to cats. When things seem as though they couldn't get much worse, Miranda's daughter Priscilla (played by the stunning Barbara Carrera) moves in with them. Priscilla mesmerizes Jenny's husband and son and Jenny grows more and more miserable with every sneeze and sniffle. Jenny forms a partnership with the police detective who is on the trail of the wicked old woman. What follows is an amusing witch hunt.

Animal action consists of a family dog (mostly atmosphere), a scene where Miranda transforms a cat to a tiger to a rabbit (the animals were photographed separately and edited on film) and the cat as the traditional witch's companion. The action with the cat is mild but it is important to the film. There is also a scene with a dead mouse in a trap. The dead mouse was a rubber mouse bought at a novelty store.