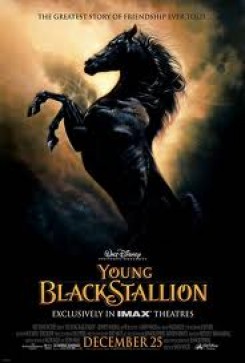 A prequel to the 1979 motion picture "The Black Stallion", Disney's "The Young Black Stallion" follows the adventures of Neera (Biana Tamini), a young girl separated from her family after an attack by raiders in North Africa circa WWII. Stranded in the Arabian Desert, Neera befriends a wild colt whom she names Shetan, or "devil". The stallion helps Neera find her way back home, and once reunited with her grandfather, the girl sees a chance to return the family fortunes to their former glory by riding the black horse in an annual, winner-takes-all cross-country horse race. This is Disney's first foray into the giant screen IMAX format.

Some intense horse action takes place during the race, including a horse that falls with its rider while attempting to jump over a fallen branch, a few rearing horses, and horses running at high speeds.

Housing and Transportation of the Animals

The horses and camels were stabled in Walvis Bay, Namibia, and transported to location on a daily basis. Proper provisions were installed inside the trucks to ensure the animals' safety and comfort during transport, and all drivers exercised considerable caution while moving the animals. Stallions tend to be aggressive with each other, so the trainers made sure throughout the shoot that these animals were always kept apart. In addition, veterinarians assessed the horses' physical condition before and after filming each day.

While on location, the crew set up temporary holding pens with shade for the animals. The donkeys and goats used in the film were housed close to the Palmenhorst set, also in Namibia. These animals appeared in a few scenes as background animals led by trainers doubling as actors.

During the opening credits, a mare lies down on the sand near some large rocks. The camera cuts to a baby colt wobbling out from behind the rocks, and the two horses frolic happily together. A trainer brought the mare to its mark and cued it to lie down. The trainer knelt beside the animal petting it as the cameraman filmed the horse at various angles. As the trainer stepped away from the horse, it naturally lifted its head to see where the trainer was going. In another shot filmed separately, the trainer hid behind the rock with the young colt and released it on the director's verbal cue.

The flight of a hooded falcon leads us to see three desert bandits on horseback ride up and try to capture the colt and its mother. The colt runs into a cave as the riders go around and capture the mare. One of the riders grabs the mare with a lead rope and they all ride off leaving the foal alone in the desert. For this scene, the production crew constructed a cave with such amazing detail viewers would never know it wasn't real. Trainers surrounded the set and the cave to ensure the horse's safety, and the openings of the structure were made wide enough for the animal to enter comfortably. One trainer released the horse while another stood in the cave beckoning it inside. The actor who released the falcon learned how to handle the bird before filming began, and a trainer carefully dressed the bird and retrieved it after the scene ended. Another trainer gave the mare's reins to one of the mounted stuntmen, and the horse was led off screen as the trainer stood nearby.

A supply-laden caravan treks through the desert when suddenly, the men on horseback ride up and fire upon the company of travelers. Neera and her camel leave the group, riding away swiftly in the sand. The camel appears to lose its footing and the young girl falls off, stranded and alone in the desert. The actress received riding lessons on the camel as well as the horse. Trainers dressed the camels and made sure that the prop bedrolls and supplies they carried were lightweight. They then placed the camels on mark in the sand and surrounded the caravan as the animals made their way along. The three mounted riders approached the caravan shooting ¼ loads of ammunition; the animals were gradually habituated to the sound and thus unfazed by the gunshots. Three trainers hid behind sand dunes tracking the camel as it trotted along in the desert. Quite stubborn by nature, the camels required close supervision by their trainers. When the animal wanted to go in a certain direction, a hidden trainer pulled on the reins in the opposite direction to make it appear on screen as though the camel lost its footing, causing the actress to fall off. In actuality, the camel was just pulling in a different direction than the trainer wanted it to move.

While lost together in the desert, a montage of images shows Neera and the colt walking, running and playing on the sand. In one delightful shot, the actress gives Shetan a drink of water from her hand and hugs and kisses him. The trainer, actress and horse worked together for a long time to achieve this scene. The horse liked the actress very much, and the trainer taught the animal to stop when the actress held her arms out in front of her. The affectionate horse loved playing and hugs, and several trainers stood nearby keeping a watchful eye out during this sequence. Although it appears as if the two frolic in an open area, parked cars surrounded the location to give it a corral feel and keep the animal and child confined to a specific spot for safety purposes.

As a car pulls up near a house in one scene, the black stallion rears up a few times and then runs off. A stunt coordinator driving the vehicle was always aware of the animal and riders' locations. A trainer cued the horse to rear on command by cracking a whip in the air. Another trainer on horseback waited at the end mark and easily retrieved the horse.

One year later, Shetan gallops up the driveway of Neera's house. The girl spots him from her window and runs outside, where she mounts her grandfather's horse and rides fast after Shetan. After catching up with the stallion, Neera mounts him and rides back to the house pulling her grandfather's horse behind. For this scene, a trainer released the horse and cued him to run up the driveway to an awaiting trainer. The actress mounted the horse and rode down the driveway as a trainer stood off camera supervising. For the ride back to the house on Shetan, a stunt rider doubled as the actress and led the other horse by the reins.

Neera's grandfather drives a horse-drawn cart and sings with the children when one of the wheels suddenly falls off. A trainer attached the cart to the horse, who had plenty of practice for this scene. While hiding out of the camera's eye, a trainer held the horse's reins and guided the animal as it pulled the cart. The wheel of the cart was rigged to fall off upon the director's cue. As the wheel came loose, the trainer hiding from the camera held the reins and brought the animal to a complete stop. When watching this scene, it seems like the horse barely noticed the broken wheel.

The last part of the film depicts a race that takes place across the desert. Stunt riders replaced actors whenever possible, and all of the actors received riding lessons and instructions on handling the horses. Trainers ran no more than eleven horses at one time and no farther than 150 yards at a time. Horses were watered and given frequent rest breaks during the shoot as temperatures rose during the day. All of the horses live in hot climates and are well-accustomed to the heat. Trainers checked out the grounds ahead of time, and the American Humane Safety Representative on the set verified that the area was clear and safe for the horses to run over. All of the animals had experience running in sand and in close proximity to other horses. Scenes of horses rearing or digging in the sand were achieved by animals trained to perform these actions on command.

During one part of the race, three riders come across a fallen branch and attempt to jump over it. The first rider stops his horse right before the branch; the second rider falls down with the horse; and the third rider jumps the branch easily. Stunt riders performed for all of these shots, which were filmed separately. The first rider stopped the horse right on cue and turned it around and rode off camera. The second stunt rider cued the horse to fall just before the branch. The rider fell with the horse and both stood up after the scene ended and walked off camera completely unharmed. The last stunt rider practiced jumping the branch several times before filming began so both the rider and the horse accomplished this scene with ease. Extra attentive viewers will notice one horse nip at another as they get close to each other during the race. The horse actually bit not the other animal but its reins, and on-set wranglers immediately separated them. As a safety precaution, these two horses were never filmed together again.

Although it does not appear in the IMAX theatrical release and may forever remain on the cutting room floor, the production did film a scene using a cheetah and complied fully with the guidelines established by American Humane.

In addition to American Humane, the Animal Anti-cruelty League of South Africa also monitored the animal action on set and granted the film an end-credit disclaimer as well.