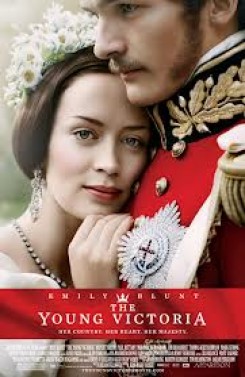 This film follows the early years of Queen Victoria as a ruler and her romance with Prince Albert.

Victoria (Emily Blunt) has a pet dog named Dash that is seen in several scenes performing such mild action as lying on a piece of furniture or following Victoria as she walks around the palace, both inside and outside. In one scene, Albert (Rupert Friend) and Victoria spend time in the palace garden, throwing a ball for Dash, who fetches it and brings it back. In another scene, as Victoria leaves the room upset, the dog follows her and a man kicks it as it passes him. The set was only open to necessary cast and crew members, who were all introduced to the dog and instructed on its proper handling before filming began. The actors carried treats with them, which the dog knew in advance, so it was easy to get the dog to walk with the actors when needed. A trainer put the dog on its mark and stood off-camera cuing the dog to perform the mild action that was needed. For the scene in which the man appears to kick the dog, an off-screen trainer cued the dog to follow the actress out of the room to another trainer. The actor was instructed to raise his foot and touch the dog as it passed by him. The dog's squeal was a sound effect added in post-production.

In one scene, Albert arrives at the palace and enters a room, walking two greyhounds on leashes. A trainer handed the dogs to the actor right before filming began and then retrieved them afterward.

Throughout the film, we see horse-drawn carriages stopped in front of the palace or moving with people inside. Only experienced handlers were allowed near the horses and allowed to drive the carriages. No loud noises or quick movements were allowed and only necessary cast and crew members were allowed on the set. All grounds were checked ahead of time. Trainers brought the horses and carriages onto the set and placed them on their marks. The trainers hooked up the horses to the carriages. The carriages were always driven at a slow to moderate speed by experienced drivers and only went a short distance up the palace driveway. Trainers and experienced horse wranglers doubled for the actors whenever possible. All actors were instructed on the handling of the horses and the actors who rode horses were given riding lessons by the trainers before filming began.

A bystander shoots at Victoria as her horse and carriage passes. The gunfire was pantomimed and the noise was added in post-production.

Toward the end of the film, Albert and Victoria ride fast in a field in the rain and then they stand in the field with the horses standing in the background. Then they ride more slowly in the field and the rain has stopped. This scene was filmed in separate shots and edited together in post-production. The actors were given riding lessons before filming began. Trainers stood just off-camera, some on foot and some on horseback, in case the horses decided to wander off, which they did not. The rain came from a machine and the grounds were checked ahead of time for hazards.