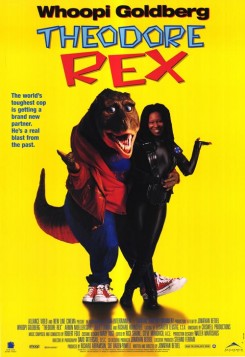 Theodore Rex is a futuristic, dinosaur fairy tale about a dinosaur named Teddy Rex. Teddy was created by a man named Kane, an evil inventor who clones dinosaurs to live and interact with humans in a New World Order. Teddy works in the public relations department for the police department known as the grid in the New World Order. He has always wanted the chance to be a detective and after a specifically bizarre murder involving a dino, the chief gives him his chance. Teddy is paired with Kate Coltrain, a grid police person. Coltrain doesn't especially like dinosaurs. Therefore, she is not thrilled when the commissioner tells her the name and specie of her new partner. Coltrain tells Teddy to just keep quiet and let her do the talking when they interrogate someone, but she soon finds out what an asset he is when the dinos won't talk to her. This is where Teddy takes over, and in so doing uncovers some very interesting facts that leads them to New Eden, Mr. Kane's compound where he clones animals of all species. Coltrain immediately picks up bad vibes from Mr. Kane and his surroundings. At first, Teddy doesn't believe that Mr. Kane could be involved, but after further investigation !they find out that he has a vision to create a perfect new world with him ruling as God. The problem is, can they stop him before he ends the world as they know it now. Before they can go any further, the doctor shows them two people he has taken hostage. One of the hostages is a female dino named Molly that Teddy is sweet on, and the other is a small boy named Sebastian who is a friend of Coltrain. Their first objective must be to protect these two innocent people from harm, then stop Mr. Kane and his madness.

When Sebastian is taken captive by Kane, he is placed in a cage in the zoo area of the compound. It is not long before Coltrain finds out about the kidnapping and comes in search of Sebastian and her search leads her to Kane's zoo. After looking into many empty cages Coltrain finds Sebastian sitting in the corner of his cage holding the monkey. She manages to shoot the lock off of the cell door enabling Sebastian and the monkey to escape. There is a scene when Teddy and Coltrain go to visit a man called the Toymaker to purchase a gun for Teddy. The Toymaker's store has many kinds of insects. There are also butterflies mounted on the wall. All of the insects were either fake or animatronic. In the closing scene at the compound, a giraffe, camel, elephant, tiger, and zebra are all seen on the grounds. In one scene two elephants cross the road, with the younger elephant holding the tail of the older elephant. To accomplish this scene the trainer merely placed the elephants at point A while a trainer at point B cued the elephants with voice commands to walk in his direction. The dinosaurs were either animatronic or actors dressed in dinosaur suits with animatronic capabilities to enable ease of movement.