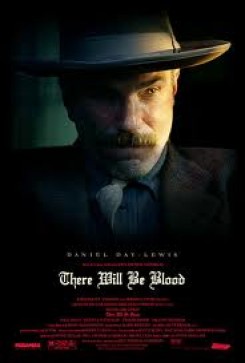 There Will Be Blood

A turn-of-the-century Texas prospector, Daniel Plainview (Daniel Day-Lewis), buys a ranch that has an abundance of oil on it. He thinks he has found the American dream and life will be good; however, he finds that it destroys him.

Horses and mules are seen in the background of many scenes, standing still, pulling wagons, being led by reins or being ridden. Paths, pens and grounds were checked for safety ahead of time. Limited cast and crew members were allowed on set and wranglers stood off-camera, some on foot and some on horseback. Safety meetings and riding lessons were given before filming began and wranglers and trainers doubled as actors whenever possible. The carts were attached to the animals by the trainers and the loads were very light. In a few scenes, gunshots were fired when horses were nearby but quarter loads were used to lessen the noise. The production provided documentation that a dead horse used during filming was a prop. This horse does not appear in the theatrical release. Goats, chickens and pigs are seen in the background and in pens during some scenes. The animals were kept separate from each other. Wranglers and the American Humane Animal Safety Representative checked the grounds and pens before filming began to make sure it was safe for the animals. The wranglers placed the animals into the pens and made sure there was water and food for them. A few children walk through the goat pen in one scene. The trainer instructed the child actors ahead of time on the handling of the animals. The actors watched where they stepped as they walked through the area. As Daniel (Daniel Day-Lewis) sits in a chair at his house in one scene, he shoots a gun through his house, making a mess. Later, we see a dog sitting on the floor near the mess. Several men pass the dog. The dog was not around when the gun was fired. The trainer placed the dog on its mark and made sure it was not near anything that could hurt it. The off-screen trainer retrieved the dog afterwards. American Humane did not monitor the quail in the film.