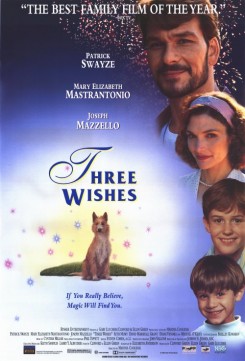 Three Wishes is a warmhearted drama about a mother, Jeanne Holman, and her two sons, Tom and Gunny, who, in helping a stranger, end up changing their lives forever. It is 1955 and Jeanne Holman is driving along and being distracted by her sons, Tom and Gunny, when she swerves to avoid a dog in the road. However, she accidentally hits the dog's owner, Jack, a traveler and a beatnik free spirit who's leg has been broken by the impact. When she later sees Jack, on crutches and in a cast, hitch-hiking alongside the road with his dog, Betty Jane, she feels guilty. She stops, not only to give him a lift, but to insist that he stay at her home until he is able to walk free of the cast. He and Betty Jane accept the invitation. During his stay, we discover that Jeanne's husband, a pilot fighting in the Korean War, is presumed dead. She is confused about her future as a single mother and is trying to start a business of her own. Jack is a very different character from the middle class conformists in her community. He is not only attractive, but very understanding and insightful. He makes sun tea, unheard of in the fifties, writes in a journal from back to front, has a beard, sunbathes in the nude, meditates and is guarded about his past. His metaphysical beliefs seem strange at first, but Jeanne, Tom and Gunny are enthralled with him. Gunny and Jack's dog, Betty Jane, become fast friends and are quite inseparable. Tom, the older brother, is struggling for acceptance with the other boys and feeling a failure at baseball. When Jack begins to coach Tom, his game improves so greatly that the rest of the team want his input. They go from being losers to winners and Jack gains respect in the small-minded community and becomes a father figure for Tom. Gunny develops an illness that is diagnosed as cancer and Jeanne is sick with worry. Lying in bed, Gunny has dreams of toys that come to life and present him with magical lights that dance and zoom around similar to fireworks. Betty Jane is always at his bedside and after one fantastic dream, Gunny tells the dog that he knows it was her creating the dreams. By the time Jack's leg has healed, Jeanne is falling in love with him and Tom wants him to stay and be his dad. Jack tells Gunny the story of how Betty Jane is a Genie who can grant wishes for all three of them, Gunny, Tom and Jeanne. Gunny wants the "Genie Dog" to reveal her magical form and Jeanne wants Gunny to be well , but Tom will not make a wish, so Jack makes one for him. What they all get is far more impacting to their lives than any of them ever expected. Jack leaves to travel again, but he actually remains with them forever.

Animal action is mild in Three Wishes, although the dog is seen throughout the film and there is one scene where a deer is seen in a wooded area. The dog, Betty Jane, is the companion of Jack, the leading character and is seen often, both with him and with the little boy, Gunny. However, the action is very mild in that the dog is merely walking next to one of them, sitting, lying on the bed, riding in the car, or running alongside the boy. Early in the film, Jeanne's car swerves toward Jack and Betty Jane as they walk along the roadside. Although she tries to avoid the accident, Jack is inadvertently knocked over, breaking his leg. Betty Jane, his canine companion, is unscathed. This scene was shot in cuts. The dog was not used for the shot of the car swerving, but was filmed separately. However, in post production various shots were edited together making it appear as if the car was dangerously close to both the actor and the dog. In one scene, Gunny and Betty Jane are watching King Kong on television and they both hide their eyes. For this scene and for the majority of the action in the film, the dog responded to hand and voice commands from the trainer and was given food rewards. The dog was taught the trick of hiding her eyes in pre-production. In a scene where Gunny first bonds with the dog, the dog eagerly licks the boy's ears. Baby food had been placed on the boy's ears and the dog licked it off. In one of the last scenes when Gunny asks the Genie to reveal her true form, the dog appears to glow. For this scene, the dog obeyed his trainer's visual commands to stay in place. The glow effect was created by special lighting and enhanced by computer in post production. A deer is seen in the woods when Jack and Tom go on a camping trip. The animal merely moves from A to B. For this scene, the deer was placed by the trainer and given voice commands and food rewards.