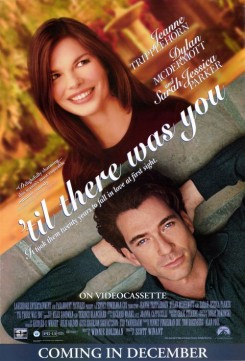 Til There Was You

Till There Was You is a film about Gwen, a young girl who daydreams about growing up and having a wonderful husband and life. While playing a game of jump rope she figures out that the man she falls in love with will have eight letters in his name. A few years later she is running through her school and a boy named Nick (Nicholas) collides with her and knocks her down. Another boy named Jon (Jonathan) helps her up. She thinks this boy, Jon, will be her boyfriend, but she transfers schools and doesn't see him again. Many years pass and Gwen and Jon meet again and start to date. Just when she is ready to commit to Jon, certain events take place which convince her that he is not the one. She has also crossed paths with Nick throughout the years but neither one remembers ever running into the other as children. It is not until the two cross paths at a quit smoking therapy group, that they realize they are destined to be together.

There are a few scenes where a cat is seen sitting on a chair or couch, walking from A to B, or being picked up and carried by an actor. In one scene a program is on the TV and a dog is seen barking on the show.