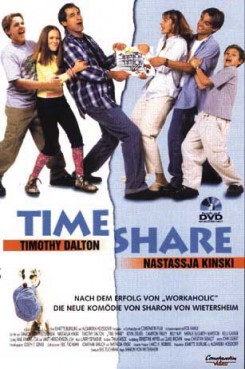 Timeshare is a family comedy that brings together two single parents and their respective children. When both families find that they have rented the same beach house for the summer, neither one will back down and give up the rental. They stubbornly share the house until fate steps in and takes everyone by surprise.

The Farragher family, headed by dad, Matt, owns an adorable little dog named Merv. One of Merv's favorite things is taking the towels from the bathroom while someone is in the shower. This inevitably leaves the humans in the story in several precarious positions. Merv is seen throughout the film romping with the kids on the beach and basically being a member of the family, riding in the car, taking the ferry boat and nuzzling in bed. Merv was played by Oliver, a Jack Russel Terrier, small on size and big on personality. Oliver was trained to do a great many behaviors and responded to his trainer's voice and visual commands. Whether he was running on the beach or making off with towels or hats, Oliver was always on his mark and stealing the scene. Also appearing in the film are some horses that calmly take riders for a beach trot. The horses are seen standing at the hitching post and then walking off carrying the actors. These California equines were Morgans. Animal Facts! A Morgan is a breed of horse that was originated by a colt named "Figure". This colt was born in 1789 in Springfield Massachusetts and owned by a gentle, soft-spoken schoolteacher named Justin Morgan, by whose name he came to be known. Although he began as an unremarkable colt, small in stature and rough in coat, over the course of his lifetime he became a legend, outperforming both colonial workhorses and racehorses alike. He survived sound in eye and limb throughout a lifetime of two ordinary horses.v As a breeder he was also quite remarkable. Where most horses are bred to others of similar characteristics, Justin Morgan's genes were so prepotent that his ability to pass his characteristics on to offspring dominated that of any of the mares he was bred to. Countless mares over several generations were bred to this stallion who founded an entire breed in his likeness. The Morgan is the oldest of all American breeds. Today, the Morgan can be found as the popular mount on American trails, favored by mounted police squads, therapeutic riding programs for their intelligence, soundness and gentleness and remain winners in countless competitions from dressage to cutting. No wonder he finds himself as an actor in a motion picture!