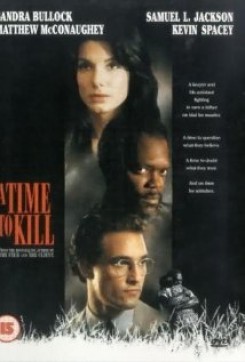 Time To Kill, A

Time To Kill is a film about Tonya Hailey, a ten year old black girl in the South, who is brutally raped, beaten, and left for dead by Ray Cobb and Pete Willard, two white men in their twenties.

With a town population consisting of only 30% blacks, Carl Lee Hailey, Tonya's father, does not believe that the two white boys are going to pay for what they did to his little girl. Therefore, he decides to take the law into his own hands. When Cobb and Willard are walking through the courthouse to be arraigned, Carl Lee comes out of the shadows with a gun, killing them both. He is then arrested for the murder of the two rapist with no chance of bail. Carl Lee's attorney, Jake Brigance, a young white man, pleads him not guilty because of temporary insanity. Jake's reasoning on the matter is that Carl Lee was traumatically shaken from Tonya's ordeal. Therefore, he was indeed insane at the moment of the shooting.

The film also deals with the question of racism and the Klu Klux Klan. The Klan is brought into the situation by Willard's brother who seeks vengeance on anyone that helps Carl Lee in his defense. Jake has to move his wife and daughter out of town after numerous death threats, leaving him and Max, the family dog, to face the Klan. The Klan eventually burns Jake's house, but fortunately no one was home. Some others are not so lucky. Jake's secretary's husband dies from a beating the Klan gives him at the couples home, and Roark, Jake's legal aid, is kidnapped by the Klan and brutally beaten.

After everything he has gone through Jake might still lose the case, unless in his closing arguments he can convince the jury of Carl Lees' innocence. When the jury is excused for deliberations the whole town is on pins and needles waiting for the verdict. Outside the courthouse, the town is divided with the Klan on one side of the street and Carl Lee sympathizers on the other, with the national guard in the middle to keep peace. The only thing that remains to be seen is if this once quiet southern town will survive after the reading of the verdict.

Max, the dog, is in three different scenes. In the first scene, he is at the front door barking after a burning cross is found in the front yard. Max is let out of the house by Jake's wife who follows the dog with the couples child in her arms. The trio run past the burning cross to safety. For the next scene, Max is seen running across the yard towards Jake as he is calling the dog's name. In the final scene, Max is seen lying on the couch in Jake's office when he hears a noise and runs over to the door waging his tail. Jake's wife walks in the door and affectionately pets the dog. For all of the above scenes, trainer #1 merely placed the animal on his mark while trainer #2 used either hand or verbal commands to cue the dog, with dog biscuits as a reward.