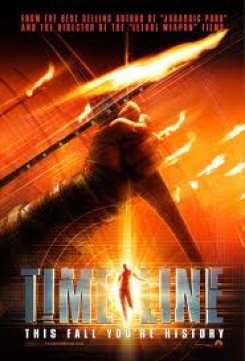 The past and present unexpectedly intersect when students of archeology professor Edward Johnston (Billy Connolly) unearth a castle chamber sealed for more than 600 years and discover the cavity also contains a pair of modern bifocal lenses and a handwritten cry for help from Johnston himself—dated April 2, 1357.

To find their missing professor, the students look for answers from the dig's sponsor, billionaire Robert Doniger, (David Thewlis) and his International Technology Corporation. Doniger informs the group he has discovered a wormhole locked on the 14th-century French village of Castlegard and devised a kind of "3-D fax machine" to send people back in time. In his zeal to experience the past firsthand, the professor finds himself trapped in Castlegard and unable to return. Led by Johnston's son Chris (Paul Walker), the young archeologists agree to travel back in time in order to save their mentor. However, Doniger fails to tell the group the risks they face while attempting to bring Johnston home—namely, getting stuck in medieval France forever.

"Timeline" features several intense scenes involving horses ridden by warring feudal soldiers. A nighttime battle scene has French soldiers on horseback and on foot fighting amid flaming arrows and a giant trebuchet hurling blazing fireballs at the British-occupied castle. Small farm animals mill about in the background of the medieval village setting.

Creating the complex sequence when the French attack the castle required several safety precautions and a slew of costumed wranglers hired specifically for their riding ability. Most of the horses wore medieval tack, and two horses appeared in full armor. For comfort, the tack and armor was lined with thick felt, and battle props included non-hazardous bows and arrows, swords, flags and shields. Firefighters were on set for all scenes involving the use of fire, and crew members checked the ground for holes prior to filming and laid down mulch on muddy spots for better footing. Also, the actors and stunt riders rehearsed all ambush and battle scenes at ¼ and then ½ speed before filming began.

When four draft horses pull the trebuchet into place for battle, professional wranglers actually do the riding and guiding. These horses were unhitched between takes to re-set, and any horsemen appearing next to the trebuchet were experienced stunt riders – with several wranglers on foot nearby. Trainers also provided the galloping horses with short rest periods between takes. The crew and horses remained at a safe distance from the catapult before firing it, and wranglers stood off camera to ensure riders did not come too close to cameras or equipment.

When flaming arrows hurtle like shooting stars through the night sky, a mounted Lord Arnaut (Lambert Wilson) and his deputy stand in place for the shot. Approximately 20 mounted French knights—all wranglers—stand behind them while 60 archers in front of the horses fire flaming arrows in unison toward the castle. The special effects unit returned the fire at stunt archers on the front line, but all of the horses stood hundreds of feet from where the arrows were intended to land, with no chance of injury. The trebuchet also remained in the background at a safe distance from the animals.

As the battle rages on, British commander Lord Oliver (Michael Sheen) orders the moat lit with Greek Fire and his archers fire flaming arrows to ignite the moat. Though they seem close by, the sixteen horses appearing in the scene stood approximately 2,000 feet away from the special effects-generated moat fire.

With victory close at hand, French soldiers storm the castle as Chris, Kate (Francis O'Conner) and the professor run past them onto the field. The moat continues to burn with flame bars on the sides of the bridge, and two mounted knights ride into the castle through the portcullis. Wranglers in wardrobe accompanied the horses on foot to make sure the animals didn't get too close to the fires or swordfighters. Crew members placed wood strips and scattered sand on the bridge for better footing, and all fires were extinguished before the horses and soldiers left the set.

Off With His Head

Kate and the professor flee the castle, followed by Chris, who's chased by two mounted knights. Suddenly, a horrified Doniger receives karmic justice when he gets "faxed" into the 14th century at the worst possible place and time and is beheaded by a galloping British knight.

For this sequence, two mounted stuntmen followed Chris at a lope over the bridge and across the field. Crew members set up a dummy in the field and the stuntman on the left lifted his sword to "behead" it. Soldiers then rode out of frame. Both the head trainer and an American Humane representative rechecked the bridge for safety, had any holes in the field flagged, and wranglers stood beside the cameras to divert the horses if needed.

When a small group of English soldiers ambush the French in a forested setting, a mounted sword battle takes place with 14 stunt riders and several saddle falls which involve the riders hurtling off their horses as the animals continue onward. In all scenes involving horses in a wooded area, wranglers carefully removed all rocks, debris and low hanging branches. Whenever an actor appears on horseback, wranglers waited at start and end marks to help with the animal if necessary. Only trained rearing horses and highly skilled stunt riders performed the sword battle and the saddle falls, and pickup wranglers gathered the rider-less horses after the saddle falls. As a safety precaution, the crew always kept swords and fire a safe distance from the animals.

The massive river crossing scene involved 54 horses and included a French army of 100 foot soldiers, 40 mounted soldiers, 2 double horse wagons, and one single-horse wagon. Once the horses cross the river, they travel past Lord Arnaut at a walk, trot or lope. The water level was waist high at its deepest point with mild current; to insure the animals' safety in this scene, crew members cleared rocks and debris from the river prior to the shot. All background riders in and around the river were professional stunt riders, and five pick up riders, a veterinarian, and five wranglers on foot were all present on set.

Chris and Kate hide from English soldiers in a hut when a horse suddenly knocks down the door. A special balsa wood and plaster construction made this act easy and safe to accomplish, and a thick leather drape covered the horse's hind end to protect from any splinters. The rider backed the horse close into position and on action backed it into the door, which gave way easily and the rider rode forward.

When it appears that a second horse rides in and over the felled door, props masters replaced the flimsy door with a sturdy set piece that would hold the weight of the horse. Prior to shooting, the horse practiced riding into the hut and over the wooden door several times to get comfortable with the action.

For scenes where soldiers lead their horses down narrow passageways, wranglers stood just off camera to ensure the riders did not come too close to cameras or equipment.

To recreate the look of a typical 14th century French village, filmmakers dotted the landscape with special effects campfires and plumes of smoke that seemed to choke the air. Background animal action includes a pair of two-horse wagons driven by costumed wranglers, knights on horseback riding from point A to B, and assorted sheep, goats and donkeys placed in holding pens by their owners. One "villager", owner/wrangler Frank Gautier, leads two Jacob sheep on a rope through the courtyard. During a later scene at the monastery, background animals include seven angora goats tethered in a field and two donkeys in a pen. Trainers took these barnyard creatures back to their farm every night.

As Castlegard smolders behind them, villagers gather their belongings and abandon the scene with their horses and loaded carts. For the cart horses, each team was rigged and hooked up by their owners, who also drove the carts. The procession of horses and people down the wooded path included three two-horse carts and 40 mounted soldiers. A camera placed on a cart and pulled backwards by a truck panned the entire lineup– juxtaposing the modern with the medieval.