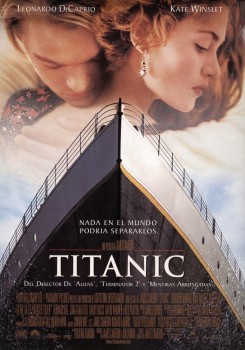 Titanic, is at first, a film about a treasure hunting group and their quest to find the beautiful diamond "The Heart Of The Ocean", that supposedly went down with its owner, on the ill fated maiden voyage of the "Titanic". When a woman of about 101 years of age, comes forward and claims that she is the owner of the diamond, it then becomes a story of a love so great that years and an ocean could not wipe away the memories.

Rose, the older woman and owner of the diamond, is seen several times holding Freddy, her dog, in her lap or walking from A to B. and riding in a helicopter. Rose is also in possession of a bowl containing a few goldfish. The goldfish are seen being taken from the helicopter and later in Rose's stateroom on the treasure hunting ship. The trainer placed the dog on its mark and cued it with verbal and hand commands. Other animal action consists of several scenes aboard the ship were dogs are being walked on leashes by a crew member. Before the Titanic sets sail, horse-and-carriages and horse and buckboards are seen at the docks. During the sinking of the Titanic, some rats are seen swimming down a flooded corridor. For all of the above scenes, experienced wranglers were used and trainers doubled as actors, walking their own dogs on leashes.