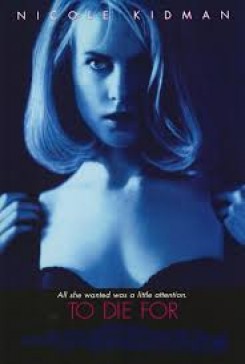 To Die For is a dark comedy/thriller told in a flashback sequence using a television docu-drama format. The story is about Suzanne, an aspiring T.V. journalist, who will do anything to become just that, no matter what it takes.

Suzanne has a Pomeranian, Walter, who is first seen as a puppy when Suzanne removes him from the gift box presented to her by Larry. The box had holes in it which supplied air for the puppy and he was only in it for the few seconds it took to achieve this shot. Walter is seen in his remaining scenes as a grown dog being petted, lying on the bed, riding in a car, being walked on a leash, barking, and being held. In the final scene, Suzanne holds Walter, who is dressed in a little scarf and cap. Walters' apparel was loosely placed on him and caused no discomfort.