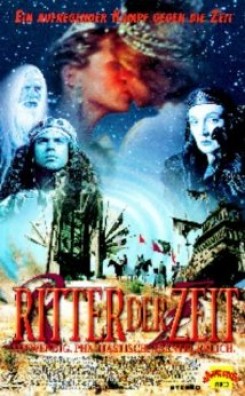 To the Ends of Time

To The Ends Of Time is a film about a king and his daughter, Princess Stephanie, who live in a peaceful village until one day when a time machine is invented. Karnissa, an evil witch, steals the plans for the time machine and forces her slaves to work around the clock to build the machine. She believes that he who masters time will master the universe, however her plans are foiled by the one man who is determined to win Princess Stephanie's love.

Horses are seen throughout the film. In one scene, three horses are standing in their stalls. James, the pageboy, grooms one of the horses. For this scene, the wranglers placed one horse in each stall and the head wrangler stayed within the stall of the main horse, just out of camera range. James wrestles to close the doors of the stable as a storm rages around him. The horses appear nervous. For this scene, horses were placed in stables with alfalfa. A wind machine was brought in to blow straw and smoke. A wrangler stood under the light in front of the horses, called the horses to the front of the stalls, and flashed lights to startle them. There are a few scenes with soldiers riding their horses off to battle and lots of horses are seen later in the desert. For these scenes, three wranglers dressed as extras rode horses and four extra's led the horses. After the battle, horses, with white sheets on them, came back to the castle carrying injured soldiers. In another scene, James takes his horse and puts a sheet on him, then they walk out of the castle through the meadow and into the desert. James gives the horse water. The horse is also seen rearing his head and whinnying after a cannon shot is heard. A horse is seen being fed. After the time machine is destroyed, James jumps on his horse and gallops off. For this scene the actor rode the horse from A. to B. to the waiting wrangler. In one scene, a dog is seen yelping in the courtyard as a battle ensues. The young princess runs into the courtyard and rescues the little dog. For this scene, trainer # 1 laid on the ground and held the dog. The actress picked the dog up, exited with the puppy and handed him to trainer # 2. After the battle, the dog is in the little girl's arms and he is licking the King's sleeve. The dog is seen again being held and petted by the princess. In another scene, a squirrel is seen on a dog, and the dog paws at the princess. A tarantula is seen sitting on a book that a man carries across the room. It is also seen on a wooden chest. The man picks up the tarantula and puts it inside the chest. Also, another tarantula is seen walking on the ground along with two mice. The trainer placed the animals on their mark and retrieved them at completion of the scene. In one scene, a black cat is seen in a laboratory purring as he circles around the magician. The animal wanders around the room, jumps on a desk and runs across it. An owl sits and watches. A boa constrictor is also seen slithering down a pot in this laboratory. Trainer #1 and #2 placed the snake on it's mark and the snake moved on his own. In a few scenes, a lion is seen. In one scene, the lion walks down an aisle during a funeral procession and sits on the carpet at the king's feet during the burial. After the burial, he walks behind the gravestone. The lion is also seen walking down the aisle toward the throne, when James and the Princess get married, he then lays down by the throne at the couples feet. For these scenes, trainer # 1 was dressed as an extra, held the lion's leash, and led the lion forward. Trainer # 2 was off camera walking beside them all the way. Once the lion was at his mark, trainer # 1 and # 2 stood off camera and used verbal commands for the lion to stay and look at camera. In one scene, the princess is holding a ferret in her hand and she has a bear sitting next to her pawing at the air and sitting up. For this scene, the trainer placed the ferret in the girls hands and trainer # 1 placed the bear on his mark. Trainer # 1 and trainer # 2 were just off camera cueing the animals to stay. In one scene several animals are with Princess Stephanie. Kittens, puppies, a rabbit, and a parrot are playing in her room. James comes into the room and a squirrel lands on his shoulder. He also winds up with a parakeet on his head. The trainer placed the animals on their mark and retrieved them at completion of the shot. Other animal action consists of a swan and a duck swimming in a pond.