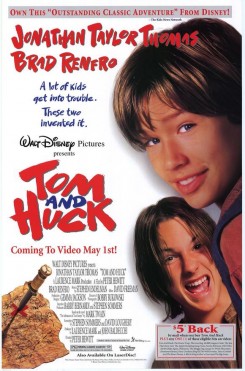 Tom And Huck is a remake of the adventures of Tom Sawyer and Huckleberry Finn which takes place in the year 1845 in Hannibal Missouri. Twelve year old Tom, mischievous and naive, dreams of escaping the constraints of town living.

In an early scene we see Huck's brother in bed, Huck puts an open jar containing a tarantula on his brother's stomach and climbs out of the window. The next morning we see the tarantula again when Aunt Polly places the jar on the table as Huck sits down to breakfast. In the first scene, the actor merely placed the jar containing the tarantula on the other actor's stomach and later the jar was placed on the breakfast table. Two tarantulas were used. Each was only in the jar for a few seconds. Each tarantula had an oversized cage where it was housed when not being filmed. Other animal action includes horses, dogs and chickens, used as background atmosphere. Horses are also seen pulling wagons or being ridden. We had a report during filming that Injun Joe had abused his own dog that was with him on location. This was investigated by the Greater Hunstville Humane Society. The actor was advised to grant permanent custody of the dog to someone else and he complied. The abuse did not take place on the set but rather at the actor's hotel room. The dog was not part of the production.