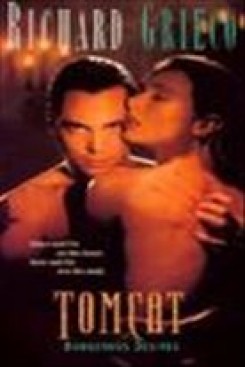 Tomcat is a suspense-thriller about Tom, a man with a terminal disease, and a doctor who performs experimental surgery to try and save Tom's life. Tom has sought the help of Dr. Jackie as a last resort. He has an incurable terminal disease and no other doctor has been able to help him. Jackie has offered to perform an experimental procedure which involves grafting some of Tom's brain cells with those of a suitable donor. Jackie does not inform Tom that the donor she intends on using is not a human, but a Tabby cat! The operation is a success and Tom feels better than he ever has. But he has noticed that he has a definite aversion to water and suddenly likes to be in high places. As time passes, Tom takes on more and more cat qualities, including an unrelenting need to "mate" with almost every woman he meets. Dr. Jackie decides she must tell Tom about the cat that was used in the operation, so that he may understand what is happening to him. She informs him that she could try to perform another procedure to change him back. He becomes very upset with this suggestion and an argument ensues between them. Jackie tries to push Tom from the balcony, but Tom is able to grab onto a cable hanging from the ceiling. Jackie is not so lucky and falls to her death five stories below. Tom now sets out to kill the other three people that know of his circumstances so that there will be no chance of anyone trying to change or destroy the new breed of "person" he has become.

There are several disturbing animal scenes in this film. In one scene Jackie is in her lab working with a grasshopper type bug which she has attached to a mat with pins in each one of it's legs. While she is working, her partner comes in and they have a disagreement about a cat that he wants to use in an experiment. He approaches the cat, who is in a cage, but the cat does not come. He grabs the cat by the back of the neck and pulls him towards the cage opening, at which time Jackie comes and takes the cat away from him. While they are still arguing about the cat, Jackie becomes very upset and starts dumping all of the insect specimens onto the floor, with bugs landing everywhere. She takes one container of roaches and throws them onto her assistant, who brushes the bugs onto the floor. Jackie storms out of the lab leaving her assistant behind. While he is standing beside a file cabinet, he sees a large beetle walking along the top of the cabinet. The man makes a fist and smashes the beetle, brushing the squashed bug onto the floor. In another scene Jackie is watching a tape that she had made of the operation that she performed on Tom. On this tape we see a Tabby cat lying on a surgical table, the skin on its head laid open and tubes running out of its head and mouth. This same tape is also shown in three other scenes. Other cats are also present in a few other scenes. American Humane was not informed of this production, and therefore was not on the set. Futher, after several attempts to contact the production company regarding the animal action, we were unable to get any data.