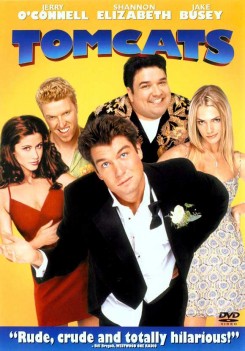 Tomcats is a traditional dude flick featuring Jerry O'Connell as Mike, "the guy with major commitment issues." He and his lesser relationship-phobe friends make a pact that the last guy to fall off the wagon and get married loses the pool of money they've generated for that purpose. But throw Shannon Elizabeth into the mix and Mike's focus shifts from the money to the girl. Will he succumb to the newfound pressure of romance? Or will he keep his eye on the prize...

During the Mission Impossible: 2 spoof, Mike falls from the side of the mountain into a crevice, scaring a group of white birds to fly out of their nook and into the sky. The birds were homing pigeons that were trained to return to their starting point after the trainer released them. The scene itself was shot on a sound stage in front of a blue screen-the mountain and crevice were added in later.