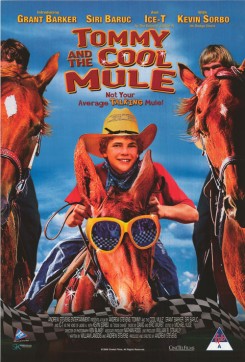 Tommy and the Cool Mule

When a boy finds out his and his mother's house is about to be foreclosed, he bumps into a talking mule who helps him enter a horseback riding contest, and he plans to ride his new mule friend in hopes of winning the race and using the prize money to save his home.

In this film, a German shepherd named Major is seen performing such mild action as being petted, sitting, lying down, running, walking (on- and off-leash), barking, growling, and poking his head out from under the bed. For these actions, trainers stood off-camera and used verbal commands and hand signals to cue the dog, who was very well-rehearsed and accustomed to performing the mild actions. The actors were also well-rehearsed and instructed on the dog's proper handling. The dog was retrieved and given praise and treats between takes. In one scene, Major runs through a field with Tommy (Grant Barker), and later, Tommy rides off on his bike while Major chases after. This scene was filmed in separate shots. One trainer released the dog from its starting point while another trainer stood at a midpoint, calling the dog. Then the camera was repositioned and a trainer released the dog from the midpoint, while another trainer called the dog to duck under a fence in the field. The actor rode a specific path on the bike and the entire scene was well-choreographed and rehearsed beforehand.

For the brief puppy scene in which Tommy plays with a young Major in a barn, trainers handed the puppy to the actress playing Tommy's mom. She then handed it to the child actor, who had been instructed on how to interact with the puppy. Trainers stood just off-camera. The puppy was retrieved right after this mild action.

Throughout the film, several horses are walked, tied or ridden, and Jackie the talking mule performs such mild action as standing (tied to a post), being walked with a lead rope and being ridden. Two mules were alternated in the role of Jackie.

To get Jackie's lips to move, a wrangler placed hay in the mule's mouth, then pulled some of the hay back while the mule chewed and moved its lips. This "chewing" action made it look like the mule was talking. His voice was added in post-production, and the lip movement was inserted where needed.

Cast and crew were instructed on the proper handling of all animals, and anyone who rode a horse was a seasoned stunt rider or an actor who had had lessons beforehand and was experienced with riding. For the arena scenes, the barrel scenes and the horse race, the actions were all extremely well-choreographed, and the riders had been well-rehearsed for the action. The children were also experienced riders, and several wranglers and trainers were on foot and horseback all around the area. Also, camera angles "cheated" the shots to make it look like the horses were closer together than they were. The child rider's fall from the horse was a well-choreographed fall. The horses and mules were accustomed to the terrain and were comfortable being ridden at various speeds.

In a few shots, the mule and the dog are together; these animals were well-rehearsed and familiar with each other. The child actor playing Tommy was also well-rehearsed for scenes in which he fed, walked with or rode Jackie, and he was instructed beforehand on how to feed the mule. A wrangler stood just off-camera to guide the mule, and another wrangler on horseback was also just off-camera. All costumes worn by the mule were lightweight and custom-made for comfort.

For scenes in which horses and mules are loaded into a horse trailer, either costumed wranglers or experienced and rehearsed actors loaded the animals into the trailer. At one point, the trailer moved slowly down the road (driven by an experienced stunt driver). The animals were accustomed to this typical transportation method, and streets were closed to traffic.

When the mule is "smacked" on the rear or "kicked" in the side to get him to trot, this action was exaggerated to make it look more intense; the actors were very gentle and mostly pantomimed the action. The scene in which the kids are playing paint ball and appear to hit a horse in the rear with a paint pellet was achieved using movie magic: an off-screen trainer held the horse's reins and gently pulled the horse forward to make it appear as if it had reacted to being hit in the rear. No actual paint ball was shot.

For the scene in which the two kids drive themselves to the dance on a horse-drawn buggy at night, the child actors were instructed on how to handle the buggy, but off-screen trainers cued the horses or pulled the reins.

American Humane also monitored a scene in which Jackie waterskis, for which the stationary mule was filmed against a green screen. This scene was cut from the main version of the film.