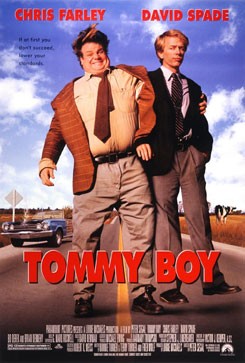 Tommy Boy is a comedic odyssey set throughout the Midwest, although actually filmed in Canada, with a most unlikely hero.

Tommy Callahan is not the most sophisticated guy in the world. He doesn't have the dynamics of his father, and he can be a little lazy causing him to screw up on occasion. But right now, Tommy Callahan is the last hope standing between his hometown and complete ruination.

When Tommy graduates triumphantly after seven years of college with a D+ average, he returns to Sandusky, Ohio, to learn the family business. No one is prouder than his father, Big Tom, or more surprised than his hometown.

Callahan Auto Parts is the lifeblood of the town, so when Big Tom takes a new bride, young Tommy finds himself confronted with the buyout attempts and intrigue spearheaded by his stepmother and her devoted son. It becomes clear that the only way to save the plant and the town rests squarely on Tommy's round shoulders.

Hopelessly oafish and clearly not a salesman like his father, Tommy enlists the reluctant aid of Big Tom's former right-hand man, who is efficient, but exceedingly obnoxious. Together they hit the road, and the road hits back!

Animal action consists of several dogs, a deer, a herd of cows and some moths. Early in the film, a dog is seen aggressively barking at an actor. For this scene, the trainer stood just out of camera range and gave the dog both visual and verbal commands.

In another scene, there is a cow stampede where the cows are seen engulfing the actors. For this scene, wranglers herded the cows through corridors that were constructed of wire undetectable by the camera. The wranglers were just out of camera range and the actors were separated from the cows. The camera angle made it appear as if there was more chaos and random activity than there really was.

In a later sequence we see a deer walking and a shot of an approaching car seen through the legs of the animal. We are led to believe that the animal is hit by the car, presumed dead and placed inside the car. However, the animal awakens, trashes the car and escapes. For this sequence a live deer, a mechanical deer and a man in a deer head costume were used. Stock footage of a deer walking was used initially to establish the presence of the deer. When the car is seen approaching, viewed through the legs of the deer, a goat was used in place of the deer. The goat was able to remain still long enough for the scene to be photographed. When the car presumably hits the deer, a mechanical deer was used. For the scenes where the deer is wrecking the car, a man in a deer head costume was used. In the final sequence we see the deer standing on top of the car and then running down and off the vehicle. For this a live deer was used. The deer was placed by his trainer and a special ramp was built, unseen by the camera, to enable the deer to appear as if it were walking off of the car. The trainer was able to get the deer to move from point A on top of the car to point B off-camera using verbal and hand commands.

There is a scene in a motel room where we see moths being sucked up by a vacuum. For this scene, dead moths were used. Twenty five to thirty dead moths were purchased by the production company and used in several camera shots to give the impression that there were many more moths than were actually there.

Later in the film, a Rottweiler breaks off of his chain and attacks one of the actors. Two dogs were used to film this sequence. One dog was trained to run from A to B and jump into the car. A second dog was used who responded to his trainer's hand and verbal commands, appearing to growl. When the dog actually breaks the chain and runs toward the actor, a specially rigged break-away chain was used and held by a trainer so that there was no chance of asphyxiation. When it appears as if the dog is attacking the actor inside the car, no dog was actually present and the car was being rocked by the production staff.

There are several scenes in the film where a dog is seen, first being picked up and given a ride, along with his hitch-hiking human companion and then riding in the car drooling profusely. For this scene, the dog merely responded to hand and verbal commands. When the dog is seen in the car with the wind blowing in his face and the drool blowing out of his mouth, the scene was actually shot in a studio. The car was manually being rocked and a wind machine was used to create the illusion of a moving car. Fake drool was placed in the dog's mouth to make it seem as if he possessed an unusually large quantity.

A representative from the American Humane Association was on the set when filming was done in the United States. However, most of the animal action was filmed in Canada. After conferring with the production company concerning the action in Canada, we are rating Tommy Boy "Believed Acceptable."