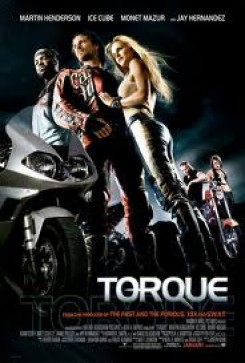 Torque is a motorcycle action flick starring Martin Henderson as Ford, a renegade biker who dares to return to town after being framed for drug possession by his mullet-sporting nemesis, Henry James (Matt Schulze). For Ford, the risk of death is worth it if he can see his long-time love and fellow biker Shane (Monet Mazur). Ford and Shane rip across California in their shiny hogs, and along the way incur the wrath of a motorcycle gang named the Reapers, led by Trey (Ice Cube).

A male Staffordshire terrier named Zeus played the part of Trey's beloved dog, Dojo. Off camera trainers cued the dog to achieve his different behaviors, which included barking and growling on command and walking alongside the actors in several scenes.

Dojo rides in the back of a truck during a scene cut from the film. A trainer hid in the back of the truck holding the dog's collar to secure him, as the truck drove at about 10 mph down a blocked-off stretch of freeway.

A cat sits on a perch outside of a gas station and meows contentedly. A trainer placed the cat on his mark and cued him to meow from off camera.

At a motorbike rally, a biker babe poses for the camera as she holds a writhing yellow python. A trainer placed the snake on the actress and she briefly held him for the scene.

In another brief scene, two dogs stand by Ford and bark at something in the distance. Trainers stood off camera and cued the dogs to bark.

A cow moos on the side of the road as motorcycles whiz by. The trainer briefly put a soft padded device called a hobble around the cow's legs to ensure that the animal would not run into the road and get hurt during the scene. This device lessens but does not prevent movement, and the cow merely stood in place and mooed at will.

Dead fish appear in a fish market in downtown Los Angeles. The fish were rubber fakes and the ice was actually rock salt.