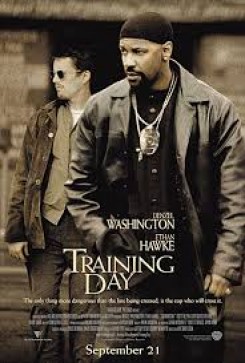 Up, Up and Away There are three different scenes in the film where pigeons fly high in the sky. Over one hundred pigeons were on-hand for these scenes. The birds were all homing pigeons and were released by trainers. All of the pigeons returned back to the trainers after the production. Up On The Roof A rooftop fight sequence features several pigeon coops with pigeons perched inside in the background of the scene. The coops were assembled for the birds by the trainers and included all the comforts of home. The gunshots were light loads, so the birds were not frightened. Trainers stood off-camera on the rooftop to supervise the action. At the end of the fight, Alonzo opens up a coop and takes a bag out from inside while a pigeon just stands and stares at him. A trainer placed the prop inside the cage and stood off to the side as the actor retrieved it. What a Bully In a brief scene, a Pit bull dog barks and growls at Jake as he dangles over the rooftop. A trainer released the dog, which ran to the corner of the fence and acted menacing.