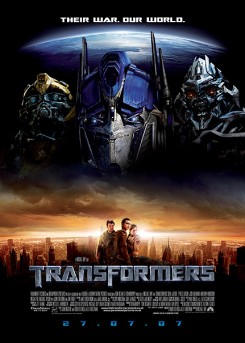 An ancient struggle between two extraterrestrial clans, the heroic Autobots and the evil Decepticons, comes to Earth, with a clue to the ultimate power held by a young teenager.

The part of Mojo, Sam's pet dog, was played by a Chihuahua named Chester. In the film, he wears a lightweight, removable plaster cast, which had an opening at the bottom for his foot to come through so he could walk comfortably. The cast was custom-made and Chester had lots of practice with it, so he was very comfortable wearing it for all the action he was asked to perform. Before filming, all actors and crewmembers were introduced to the dog and instructed on handling him so all would be comfortable with the action. Mojo is seen with Sam and his parents in several scenes where he is being carried or is laying on the furniture. This mild action was achieved by a trainer handing the dog to the actor or putting him on his mark and then standing off camera using verbal cues and hand signals to get the dog to walk, look in certain directions or bark.

Mojo has his own custom-made dog house which has a sign that reads, "Mojo's Penthouse." He walks up the ramp and lies on the porch of the penthouse in one scene. The production and trainers constructed the elaborate penthouse and made sure it was safe for the dog. The trainer walked alongside the ramp, cueing the dog to walk and lie down.

Mojo sits on a stool in the kitchen, then jumps onto a nearby counter and sticks his head out a window. Sam picks him up off the counter and holds him while he calls his friend Miles (John Robinson). As Sam speaks to Miles, we cut to Miles washing a dog in a plastic wading pool. This scene was shot in separate shots. Chester was placed on the stool by a trainer and cued to jump onto the counter. He was then cued by the offscreen trainer to go to the window. For the last shot, the dog was placed on the counter and the actor picked him up and held him while talking on the phone. An English mastiff, director Michael Bay's beloved pet, made his cameo in this scene (as he does in all of Bay's films). Bay placed the dog in the tub filled with warm water and lathered him up. Then he stood off camera and cued the dog to stay. He held up a toy and a treat to get the dog to look in certain directions. The actor sat next to the pool and rubbed the mastiff with a brush. The dog wore a leash attached to a stake in the ground, which was covered with a towel to hide it from view. There are a frog and a rabbit in the background of this scene. These animals were placed in their habitats by trainers and retrieved afterward.

Sam chases his car into an old steelyard where two dogs chained to a wall are lying on the ground and chewing on some big bones. They see Sam and jump up and growl at him. They run after Sam and the car. The chains pull the wall out and they are able to continue the chase through the steelyard until a police car shows up and the dogs disappear. A Rottweiler named Nadine and a Belgian Malinois named Ammo played the mean watchdogs for this scene. The dogs knew each other so they were comfortable together. This scene was shot in several separate shots. The dogs were well-rehearsed with the action and the car driving nearby. One trainer stood off camera holding the chains attached to the dogs while another one cued the dogs to run, jump, bark and growl. Computer graphics were used when the chains pull the wall down.

When men burst into Sam's house in one scene, Mojo stands next to the family and barks at the men. Judy (Julie White) picks up Mojo and holds him. The men take the family away and we see one man walking Mojo to the car on a catch pole, a device commonly used by animal control officers. These scenes were shot in separate shots. The dog was placed on its mark or in the actor's arms and the trainer stood off camera using hand signals and verbal cues to get the dog to look in a certain direction or bark. The catch pole was placed on the dog by the trainer, who made sure it fit loosely and comfortably and instructed the actor on the handling of the dog.

Mojo pushes open a screen door, runs out of the house and into the yard, and relieves himself on a transformer. The transformer is lifting its leg to squash Mojo when Sam picks the dog up and carries him back into the house. This was filmed in separate shots. The screen door was very lightweight and easy for the dog to push open when cued by the trainer. Another trainer stood off camera and called to the dog, who ran over and was rewarded with a treat. The second part of the scene was easy to achieve. A trainer placed the dog on its mark in the yard and a creative high camera angle was used to stand in for the large transformer to be added by computer later. The dog was cued to bark, growl and even lift its leg. The rest was added in by computer in the editing room. The third part of the scene was also easy to accomplish. The dog was put on its mark in the yard and the actor picked the dog up and took him back inside the house where an awaiting trainer retrieved him.

In one scene, Sgt. Lennox (Josh Duhamel) orders his men to begin shooting. As gunfire and explosions go off, we see people running along with some goats, chickens and a camel. Chicken feed was scattered in an area to entice the birds. The goats were contained in an area surrounded by several actors and trainers in costume. The camel was put on its mark by its trainer who also doubled as the actor in this scene. The gunfire and explosions were added in later, in postproduction.

Captain Witwicky (W. Morgan Sheppard) and his men are digging out a ship stuck in the snow in the Arctic Circle. There are a few dogs with them helping them dig. The snow caves in and the men and dogs fall through. This scene was filmed against a green screen, in separate shots. The snow was made of shredded paper and a fan was used to blow it around. The ice picks that were used for digging were fake and not at all dangerous. The ice and icebergs were made out of plastic foam. There was no ship on the set; it was added in later by a computer. The dogs were placed on their marks by trainers who stood just off camera. As some of the men appear to be pulling the ship out of the snow, the dogs and other men begin to run. Off screen trainers cued the dogs to bark and run to them. When the snow caves in, we follow a man and a dog sliding down an ice tunnel into a transformer's hand. A platform was constructed with a sheet of plastic foam doubling as the ice. The actors held the dogs as the sheet of plastic foam was lowered to some padding. Trainers were off camera to retrieve the dogs. A slide was built and secured to the set. Plaster enclosed the slide to make it appear as if it were a tunnel with openings at the top and bottom. The trainer placed some nontoxic makeup on the dogs to make it appear as if there were snow and ice on them. A combination of real and fake ice was used on the slide. Creative camera angles made the slide seem steeper and longer than it really was. The stuntman went down first and the dog followed. The dog was wearing a harness, which the offscreen trainer was holding. A platform was built at the top of the slide so the actor and dog could wait at the top before getting the cue to slide down. The trainer placed the dog on top of the slide and another one cued the dog to slide down to where he was waiting. To give the appearance that the dog and actor landed in the transformer's hand, a large platform was built and secured on the set for the dog and actor to sit in. It was padded for comfort and safety and filmed in front of a green screen.

The ostrich seen at the gas station was a permanent resident of the area where the scene was filmed. It was filmed in its natural habitat. A bubble aquarium with a large goldfish swimming inside appears in the background of a few scenes. An aquatic supply store supplied and maintained the aquarium while on set.