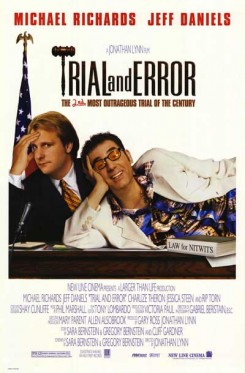 Trial And Error is a film about Charles, a lawyer from a high profile firm, who is engaged to a wealthy woman. Charles has everything life could offer until Ricky, his best friend and a wanna be actor, throws him a bachelor party which results in Charles inability to appear in court the next day. In an attempt to make amends, Ricky appears in court impersonating Charles. Soon thereafter, Charles life begins to unravel. However, in the end, after a series of events, he sees that Ricky actually did him a favor as he finally realizes there is more to life than money and power.

In one scene a dog is seen lying on the front porch of the hotel and then he follows the owner as he walks away. The trainer placed the dog on his mark and cued him with verbal and hand commands. In a few scenes Tiffany, Charles finance, and her dog are seen sitting on a couch. In one scene the dog is merely lying on the couch beside the actor and in another scene, he is lying on the couch licking at his fur. At that point, Tiffany is seen nudging the dog to get off of the couch, and he does. The trainer placed the dog on the couch and cued him with verbal and hand commands. When Charles is walking towards the hotel a rabbit is seen hopping from A to B. Trainer #1 released the rabbit while trainer #2 buzzed him to a crate at point B. Other animal action consists of some horses seen running in a field as Charles and Ricky drive by in their car and a horse is seen walking from A to B in the hotel parking lot. In another scene there is a brief shot of a wolf howling into the night air.