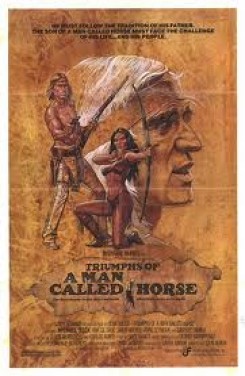 Triumphs of a Man Called Horse

An Englishman, John Morgan, lives 30 years as a Sioux named Man Called Horse. In 1874, gold is discovered in the Black Hills, on tribal land guaranteed to the Sioux in the Laramie Treaty of 1868. Settlers pour in and White provocateurs try to prompt the Sioux to break the treaty (so that all-out war with the US forces will result in the land no longer being under Sioux control). They murder and make it look like Indians were responsible. Man Called Horse helps maintain calm among the tribe, but when tragedy befalls him, it's left to his son Koda and Koda's lover, a Crow named Red Wing, to devise a strategy to keep the argonauts at bay and the Black Hills sacred.

AHA was denied monitoring access to Triumphs of a Man called Horse because it was a non-union film and not contractually obligated to comply with AHA. As a result, horses were tripped and buffalo were killed during filming, earning it an Unacceptable rating and a national boycott of the film. As a result, USA TODAY published an article expressing AHA's concerns and informing the public of the film's animal cruelty.